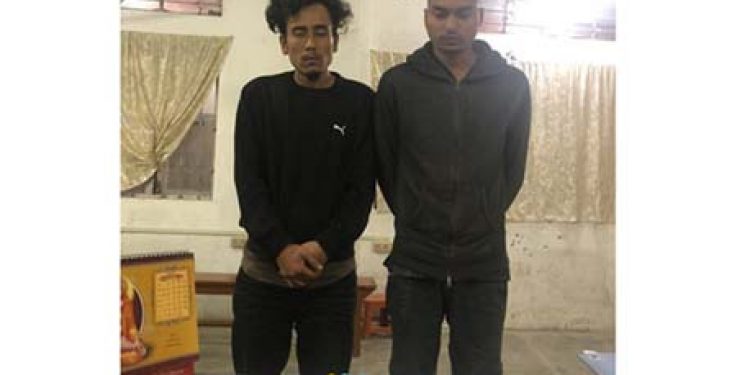 The two arrested persons along with the seized heroin. Image credit - Northeast Now

The Capital police on Wednesday arrested two drug peddlers from the township at Itanagar and seized 10 gm of suspected heroin from their possession.

The two accused have been identified as Kukhal Jurai, a resident of Damsite, Naharlagun and Deepak Nath, who is a resident of Police Colony in Itanagar.

The arrests were held in connection with a case registered at the Naharlagun Police Station under sections 120(b) of the IPC, Sec- 21(b) of the NDPS Act and 25(1A) of the Arms Act.

“Both of these boys are active drug peddlers in the region and they were caught following a well set trap by a police team led by SI Sushant Saurabh Jha,” Papum Pare Superintendent of Police Tumme Amo informed while adding that the entire exercise was conducted under the supervision of Naharlagun Police Station Officer-in-Charge, Inspector Nikom Riba and SDPO Make Bui.

Amo also informed that the Naharlagun police have already arrested five more persons including the drug supplier based in Guwahati with reference to the case and recovered an illegally possessed 9 mm pistol and around 100 grams of heroin.

“Following the arrest of the supplier, the police here have been trying to nab all the peddlers linked to him,” Amo said.

He added that more arrests are likely to be made in the following days.