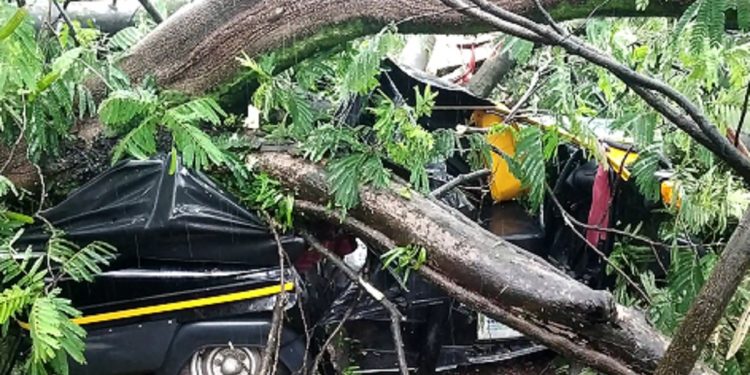 In a major incident a big tree, a species of Cassia family was uprooted due to excessive rain at Pasighat in Arunachal Pradesh on Thursday.

One auto-rickshaw driver was grievously injured while three auto-rikshaws were completely damaged on Thursday morning at around 8.45 am at Mirmir Tin-ali near All India Radio Station at Pasighat.

As per auto stand secretary of Mirmir Tin-ali, Tayong Siram, the big tree fell down suddenly upon the auto stand which also blocked the normal traffic movement along the main C C Road.

“Had it happened in non-rainy days, the situation would have been more dangerous as several auto rickshaws are parked under the shed of this big tree.

Due to heavy rain from last four days and particularly non-stop rain since early this morning, there were not much rush of people and so auto drivers were also not on the auto stand for which only one person was injured and three auto rickshaws were damaged.

Else, several auto rickshaws along with several drivers including passengers/commuters would have been killed,” added Siram.

The injured person, Bajong Pertin was immediately rushed to the town’s Bakin Pertin General Hospital where two stitches were done on his injuries who was later declared safe; else the extent of damages caused to his auto rickshaw shows its seat occupant won’t escape deaths.

However, the clearance of the fallen tree is under process after cutting off the electric connectivity of that area and restoration efforts are on.

When enquired about the age of the tree and whether it was planted during British period by Britishers, some people informed that, it was planted by a laundryman.

And when that laundryman, one Pawaru Prasad, who originally hails from Uttar Pradesh was asked, he confirmed that he had planted the tree some 36 years ago during August 1983.

The tree was planted as there were no shady trees around the location then in those says and the sapling of the tree was collected from nearby Forest Department.