Key feature of colloquium is discussion on ‘way forward’ for retention of indigenous culture; interaction amongst all the CRPs on learning from each other 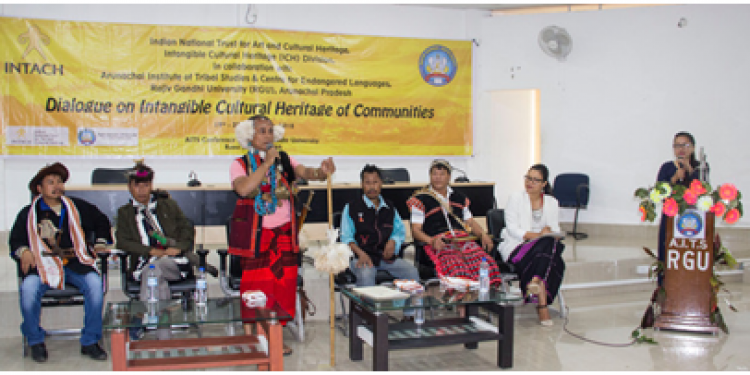 A two-day colloquium on ‘Dialogue on Intangible Cultural Heritage of Communities’ got underway at the Arunachal Institute of Tribal Studies (AITS) in Rajiv Gandhi University (RGU) campus at Rono Hills near Itanagar in Arunachal Pradesh on Monday.

The colloquium is organized by the AITS in collaboration with Indian National Trust for Art and Cultural Heritage (INTACH), Intangible Culture Heritage Division, New Delhi.

Speaking at the inaugural ceremony as chief guest, RGU Vice Chancellor in-charge, Professor A Mitra emphasized that in addition to its role as a provider of quality higher education, the University is also mandated in its charter to document and assist in the promotion of the rich culture of the tribes in the State.

He underlined the importance of organizing such programmes along with academic works and research and mentioned how collaborations with the communities are essential to bring out more constructive output.

Addressing the gathering, Nerupama Y Modwel, director of ICH division, INTACH spoke on how maintenance of heritage and community memories are essential and steps to preserve and understand them should be taken seriously.

In her keynote address titled ‘Unseen but Felt: This Continuum of Culture’, renowned poet and professor at Delhi University, Sukrita Paul Kumar encouraged all community members to embrace their traditions and appreciate their cultural heritage.

She also spoke about how the skills and knowledge of tangible cultures is an asset for any community in order to bridge the emerging cultural disconnect and to ensure continuity.

Earlier, welcoming the participants, AITS director Professor Simon John shared that the idea of having the dialogue was to engage with the communities and explore ways by which the intangible heritage can be protected and promoted.

Dr Shiela Bora, convener INTACH, Assam Chapter, dubbed Arunachal as an anthropological museum and stressed upon integrating modernity with tradition so that cultural heritage will be kept alive and preserved in its beautiful and unique form.