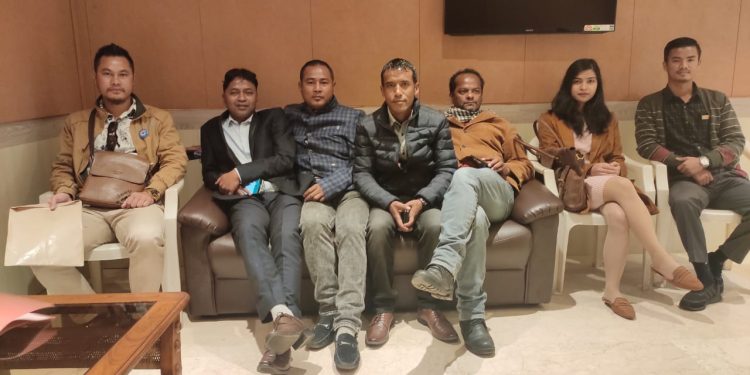 Through the memorandum, the KSU made its stand clear about opposing the CAB in its present form.

Earlier on Monday last, the KSU and the Garo Students’ Union (GSU) had staged a sit-in demonstration in Shillong opposing the CAB.

The protest was under the aegis of North Eastern Students’ Organization (NESO).

The two unions had also submitted memorandum to the Governor in this regard.

Meanwhile, at a meeting held around 9 pm on Friday in the national capital, the union home minister attempted to convince the Twipra Students’ Federation (TSF) delegation that CAB is in fact a tool to protect the indigenous communities of Tripura.

Amit Shah tried to convince that in a sense once the bill is enacted it will put a stop to illegal immigration.

However, the TSF it is learnt was unfazed by this coaxing and they had stuck to their guns that they will never accept CAB.

Later around 11 pm, the home minister met the Mizo Zirlai Pawl (MZP) delegation where it was conveyed to them that since ILP is in force in Mizoram hence CAB will have no impact and will not be applicable to the State.

The Mizo delegation, however, rejected the idea and asserted that exclusion from CAB is not only a Mizo affair but of the entire Northeast.

In other words, the MZP are totally against the bill not only for the welfare of the Mizos but for the entire north-eastern region.

‘Union Home Minister Sri @AmitShah on Friday consulted political parties and civil society organisations of Tripura & Mizoram for over 4 hrs on proposed #CAB. Today he will discuss it with delegations from Assam, Meghalaya & Arunachal Pradesh. Things are moving in right direction.’

The union home minister is meeting the All Arunachal Pradesh Students’ Union (AAPSU) delegation at 11 am on Saturday.

The KSU is being represented by Lambok S Marngar, its president and the memorandum will be submitted by the Union to the Union Home Minister.

Accompanying the KSU delegation from Shillong will be the KSU Delhi unit led by Marbiang Khongwir, the unit president.

Meanwhile, Meghalaya chief minister Conrad Sangma has written to Amit Shah apprising the latter about the resolution taken by the stakeholders of the State regarding CAB.

Conrad wrote ‘Whereas all the stakeholders comprising of State Government, political parties, autonomous district council, civil societies met on November 20-30 at New Delhi and resolved to oppose the Citizenship (Amendment) Bill, 2019 in the state of Meghalaya’.