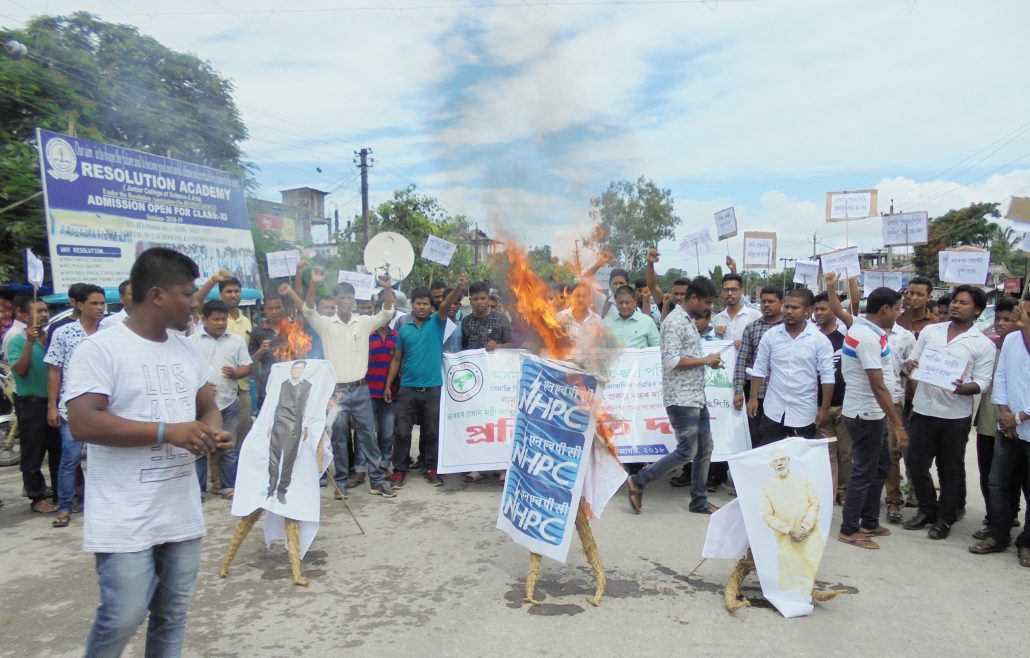 The protest was organised by the Dhemaji district committee of AJYCP in association with Gogamukh Anchalik committee.

They also shouted slogans against the Central and State governments for their forceful execution of the hydro projects and demanded to halt all construction works in Subansiri Lower Projects and other projects in Arunachal rivers.

The AJYCP leaders alleged that the state government during their tripartite talk with central and State government assured them to suspend construction works of the Subansiri Lower projects until the expert has assessed the probable downstream impact and formulate an effective mitigation policy.

But, the NHPC authority owing go ahead gesture of the central and state governments is continuing construction concealing the facts to the protesters.

The student leaders have cautioned the government not to play cats and mouse game with the sentiments of the people of Lakhimpur, Dhemaji, Majuli and Jorhat districts and demanded immediate scrapping of the mega dam projects in Arunachal rivers.

Referring present disaster in Kerala, the protesters say that the water released by the mega dam constructed in Arunachal rivers will create deluge in downstream Assam.

“It can be predicted that the mega hydro dams constructed in Arunachal rivers will create ecological catastrophe in downstream Assam and affect geography and demography in Dhemaji, Lakhimpur, Majuli and Jorhat districts in near future.

“We will continue our agitation in protest against such dam construction and the government will be responsible for any adverse situation for it”, said Priyanku Pratim Chutiya, president of Dhemaji district AJYCP at protest ground.

Earlier too, AJYCP with support of various students unions and community organizations of Dhemaji and Lakhimpur districts staged protest against the Subansiri Lower project, which was ignored by the authorities in the pretext of talk with the protesting organization.