A feeling of numbness

What will you write and what will you do? It seems a feeling of numbness is growing all around us.

What a circus! What a surreal drama!

Old ideologies are dispensed with the new ones without a qualm. What shamelessness. And till the other day some of them were saying that they would be the saviour of Assam and Assamese identity! 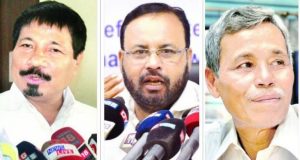 Assam, Assamese identity, regionalism – how many times will they betray us in the name of these lofty words and ideals? Do you know who disliked the CAB most? No one disliked the CAB like the three AGP ministers and the MLAs who were enjoying some office. Don’t be mistaken. They disliked it not because it was against the interests of Assam or it was a divisive and communal bill. No, absolutely not. They disliked it because it made their political life most embarrassing and miserable in the eye of the general public.

Their coalition partner BJP so vehemently and adamantly supported the CAB that their life became miserable. Being cornered from all sides, they had to stage a drama of resigning from their ministership. They resigned but their resignations were not accepted for quite sometime which raised doubts about their actual intentions.

No, we needn’t had to wait for long. After the initial dilly dallying, finally they could muster enough courage to take back their resignations, rejoin their respective ministries and join hands with the BJP for contesting the general elections unitedly, despite BJP saying that it would bring the CAB again if they came to power. 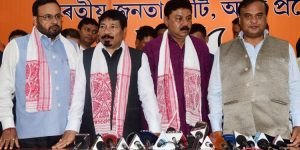 There had been singular cases of betrayal, but never had Assamese middle class failed Assam so much as it had done in last four decades. What did these parties and their allies represent? They represent the strain and character of Assamese middle class which is hopelessly selfish and sectarian. They speak in terms of Assamese identity and regional sentiments. But that is only their ploy to bargain power with Delhi.

They are nothing but lackeys of Delhi. Throw some crumbs to them and they are ready to lick your boot. So when people say that we need a regional party it makes no sense. A regional party without a pragmatic programme and some commitment and integrity is meaningless. In last four decades, Assamese middle class has proved that it lacks a stern ideology and it is utterly spineless.

The best example is Assam agitation and its outcome. It made a section of its leader wealthy, rich and powerful, but did nothing to the ordinary people of Assam. The same legacy is continuing now. More than half of the current BJP leadership has come from this regional party. And see their behaviour now?

For some people Congress is an anathema. They failed to remember two important turning points in the history of Assam. Immediately after the independence of India, there was a plan to group Assam with Pakistan. But the Congress leadership of Assam vehemently opposed and protested against this so that Assam could maintain its present autonomy and identity.

The Congress leadership also came from middle class Assamese people only. The Assamese middle class then had the spine and guts and they had an organic relationship with the common people too. Yes, it is true the Congress of today, is not the erstwhile Congress. But despite that, didn’t it save Assam second time from the clutches of CAB?  Now compare this with the role played by the so-called votary of nationalism and regionalism. Their compromise and selfishness was so evident.

So there is no point in lamenting the absence of a regional party in Assam now. It is no good and only a bogey to exploit the sentiments of Assamese people. There is no such thing that a national party cannot uphold the regional issues and look after regional interests.

It is a myth and it is high time that this myth of regionalism was exploded. There is nothing called regionalism and nationalism in Assam. It is but rank opportunism in the name of regionalism.

Additionally what have we witnessed when political parties are choosing their candidates for the elections in Assam?

The scenario is very fluid at the moment. Even after doing all the aerobics, political parties are not finding enough candidates to field in various constituencies. The BJP is not fielding most of its  siting MPs. Why are they looking for new faces? Is it their weakness or strength? The Congress has also not yet been able to decide its candidate for the prestigious Guwahati constituency. What has come out clear is a situation of despondency on the part of the ordinary citizens.

The same drama is being enacted with different players.  A viable alternative has become a far cry. Politics has become a game of betrayal!