Swim feat for awareness about drowning in Bangladesh 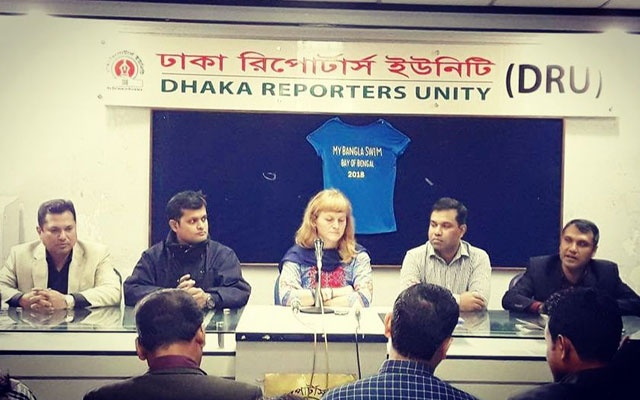 British journalist Becky Horsbrugh is all set to swim across the 16-kilometre Bangla Channel from Teknaf to the Saint Martin’s Island in the Bay of Bengal on January 28 next to create awareness about large-scale drowning incidents in Bangladesh.

Briefing the media at Dhaka Reporters Unity in the national capital of Bangladesh, she proudly claimed to be the first Briton to swim the channel.

While referring to Brojen Das, the first Bengali to swim across English Channel in 1958, she said, “I am really excited!”

She also twitted in her official handle: On the 28th of January 2018 I will be the first British person to attempt to swim the Bangla Channel in the Bay of Bengal, a 16km (10 mile) sea route from Teknaf to the Saint Martin’s Island, in southern Bangladesh.

Horsbrugh said she wanted to raise awareness about drowning in Bangladesh after seeing a report that 50 children drown in the country every day while the number is only 15 annually in the United Kingdom.

She is also raising funds for Centre for Injury Prevention and Research (CIPRB), Bangladesh, which was set up under her initiative to help keep children safe around water.

The centre is also trying to rope in Musa Ibrahim, the first Bangladeshi mountaineer to scale Mount Everest, in its paublicity campaigns.

Musa, who was present at the briefing, informed that Horsbrugh will start swimming from Shah Porir Dwip island jetty at 8:30am on Sunday and end the journey at Saint Martin’s Island jetty.

Notably, drowning is one of the top contributors to deaths of children in Bangladesh besides communicable diseases.

Horsbrugh also wrote on her blog: I am doing this swim to raise awareness of the huge issue of drowning in the country.

Around 50 children a day die in the water in Bangladesh and drowning is the leading cause of death among children aged 1-17 years old.

“Being flood prone, up to 68 per cent of Bangladesh can be under water during a heavy monsoon season. Many drownings occur inland, where water is in abundance,” she further wrote.

“Most rural homes have an adjacent pond which is used for bathing and fishing. But, unprotected, these natural water bodies are a death trap for young children.  Likewise, people living on the coast have to navigate the dangers of the ocean as they go about their daily lives and earn a living,” stated a writing on her official blog.