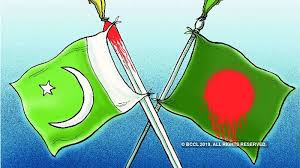 Pakistan’s Nokon Limited has been blamed for conspiracy to ‘create food deficit in Bangladesh’, the ‘Bangla Tribune’ said quoting a Bangladesh intelligence report.

The allegation states that behind the cover of importing repellent, the organisation is engaged in a plan to create food deficit in the country by suplying low quality chemicals.

The owner of the company is accused to funding militants and laundering money overseas.

The company is owned by Pakistani nationals who are believed to be working for a foreign intelligence agency, says a government intelligence report now in e possession of Bangla Tribune.

But details cannot be provided because investigations are on and disclosures could lead to suppression of evidence.

The report says that the chairman of Nokon Group, Aziz Dhamji and managing director Md Sakib Karsaj, are Pakistani citizens with US passports.

Dahmji lives in the US and comes to Dhaka for work.

The organization is linked to the marketing of agro products.

The report says that the repellent supplied by Nokon Group is of low quality.

Due to the usage of their products, paddy and wheat have become blighted by insects.

Intelligence officials believe this is a conspiracy by Pakistan to drive down foodgrain production in which Bangladesh has achieved self sufficiency.

The managing director of the organization has two accounts at the Bank of Pakistan in Gulshan which are reportedly used to launder money abroad.

The report further says that a foreign national named Shammi Ahmed stayed in Bangladesh from 1992 till 2003 and is a foreign intelligence agent.

It’s believed that he helped in the establishment of Nokon Group and the main aim of the group is to create a food crisis.

The report adds that much of the earnings of Nokon were spent for funding militants.

The company is also accused of importing items under false declarations.

However, no step was taken against Nokon as yet though recommendations for investigation of allegations were made eight years ago.

It’s believed that the government’s parliamentary committee raised objection about Nokon, saying that they may create a diabolical situation with their low quality chemicals, medicines and insecticides.

Secretary of the commerce ministry Mofijul Islam said: “The matter is old but I will look into it.

If anyone is engaged in subversion in the fame of trade then legal steps will be taken.”

Nokon now supplies mosquito repellent to DNCC and the complaint is that the repellent is ineffective.

A DNCC official says, “The repellent supplied by Nokon does not have Prallethrin, a chemical essential for a repellent to be effective.”

Executive director of Transparency International Bangladesh TIB, Dr Iftekharuzzamn says, “Since some serious allegations have been raised, there has to be a proper investigation.”

“If the complaints are proved then they should be placed before the nation,” he added.

There is allegation that leaving out the lowest bidder, DNCC, gave Nokon a work order to supply mosquito repellent worth more than Tk. 25 million.

It’s alleged that Tk 10 million was given as bribes with finger pointed at chief procurement officer, Md Jakir.

Meanwhile, Bangladesh intelligence has found concrete evidence that Pakistan-based Al-Khidmat Foundation bankrolled the huge Rohingya rally in Cox’s Bazar earlier this week to mark their two years in the camps.