Bahl, though with no illusions about Chiba's muscle flexing tactics, believes much can be gained by India if it joined One Belt One Road

A wonderful new book ‘Super Century’ by media baron and Sinologist Raghav Bahl recommends India should join China’s One Belt One Road (OBOR) initiative, even as Delhi seems upset with Chinese reactions to the recent moves in Kashmir.

China’s foreign office has opposed both the downgrading of Kashmir to a Union territory and also according the same status to Ladakh, large parts of which are claimed by China or held by its troops but claimed by India.

But Bahl, though with no illusions about Chiba’s muscle flexing tactics, believes much can be gained by India if it joined OBOR.

‘Super Century’ is not just a long list of policy prescriptions for Indian leadership to exploit the country’s many potential — it also provides a roadmap to position India in contemporary Asia and the world.

“Beijing’s OBOR initiative, designed to boost Chinese trade and cultural ties with Eurasia, is a winning proposition for India as well.  Delhi has been far more circumspect, wary of Chinese motives,” says Bahl.

He admits that the China-Pakistan Economic Corridor (CPEC), one of the key OBOR routes, is a matter of some concern because it passes through Pakistan-administered Kashmir, which India claims. 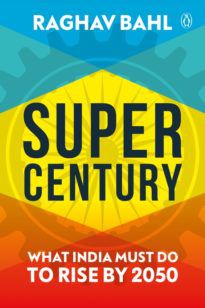 But Bahl argues that a provision in the charter of the Asia Infrastructure Investment Bank (AIIB) ,which provides OBOR funding , has partially addressed it because a clause in it requires all rival claimants to approve any project slated for development in disputed territory.

“Besides, Beijing has indicated it is open to making some concessions in exchange for India’s participation, which would give the initiative a big boost,” says Bahl , who says India should treat China as a ‘frenemy’ : “embrace when possible, ignore when prudent and fight back only when absolutely necessary.”

“Establishing an alliance with the US does not mean we have to turn our backs on China. On the contrary, the aim of multi-alignment is to explore areas of common interest with a variety of partners, rather than commit to just one (or none,” says Bahl, adding: “In any case, we could not disengage from China even if we wanted to do.”

Bahl, whose previous book compared China’s and India’s growth trajectories, says that the relations between two giant Asian neighbors have ‘deepened and matured’.

“Top-level diplomatic exchanges have become routine, including between President Xi Jinping and PM Narendra Modi, who share a mutual if guarded respect. The Chinese leader has shown a wary admiration for his Indian counterpart, because of Modi’s assertive but transparent approach to foreign policy,” says Bahl.

He argues that China is keen to wean India away from the US embrace because it is worried about a possible military grouping , if not a Nato-type alliance involving US, India, Japan and Australia which other ASEAN counties, wary of an assertive China, may join in . Secondly, China is keen on greater access to the large Indian market to make up for loss of markets in the West, specially the US.

Bahl says India and China see eye to eye on a number of issues.

“As recently emerged economies far from the centres of Western power, India and China share a basic disillusionment with the Bretton Woods institutions that have shaped global economies since the end of World War 2. That has led to creating such alternatives as the AIIB and the BRICS New Development Bank, which foster sustainable development in emerging countries,” says Bahl.

He says “our most important area of convergence is economic.”

“China’s slowdown has strengthened those ties with India becoming not only a convenient outlet for the glut of steel, cement and the like , but also an attractive alternative for nervous mainland investors ,” says Bahl, recounting that there has been six fold increase in Chinese investment in India in 2015 alone.

“And that’s just the beginning as new agreements are paving the way for greater collaboration on such ventures as high-speed rail lines, smart cities, and joint technology parks,” says Bahl, suggesting India should seriously considering the Chinese proposal to rename the CPEC and create an alternative corridor through Jammu & Kashmir, Nathu La pass or Nepal to deal with India’s OBOR concerns.

“OBOR provides another opportunity for Indian leadership, as well as access to a flood of Chinese capital. Without OBOR , we risk growing stagnant and isolated in an increasingly connected Asia ; with it India can overhaul its woeful infrastructure , create jobs and explore votal new trade ventures in China and South Asia,” writes Bahl.

He endorses diplomat Pinak Chakrabarty , a former Indian high commissioner to Bangladesh, who has said that greater Chinese investments and trade will double up the stakes for the Chinese in India and they would not want to destabilise the relationship.

“This makes perfect sense to me and unlike many Indians, I am also not worried over India’s trade deficit with China, says Bahl.

“India can use the trade deficit with China to our national advantage, using it as a tool of economic diplomacy, to negotiate better trade terms,” he argues.

Portuguese politician and Sinologist Bruno Macaes had argued in his book “Belt & Road: A New Chinese World Order” that India’s participation was crucial for the success of the OBOR.