India and Bangladesh sign 7 pacts in core areas such as transport, connectivity, capacity building and culture 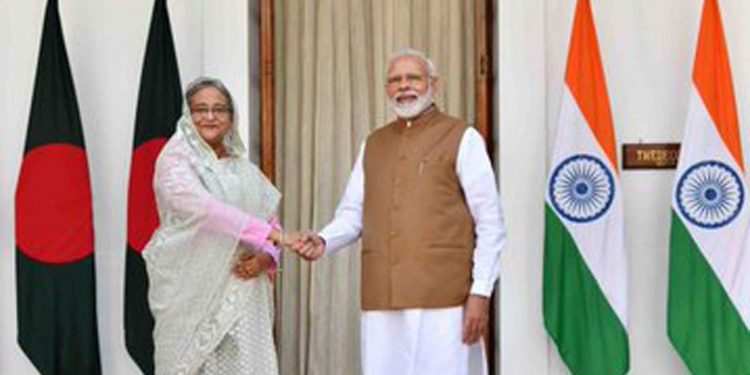 Visiting Bangladesh Prime Minister Sheikh Hasina on Saturday raised her concerns over the National Register of Citizen (NRC), which is being implemented in Assam, before Indian Prime Minister Narendra Modi.

The Indian side led by Modi, according to sources, told  the Bangladesh side led by Hasina that “it is an ongoing process.”

Later, a Bangladesh official told reporters that they will see how the situation emerges.

On Thursday, Hasina said she was satisfied with Modi’s assurance that her country would not be perturbed over the implementation of NRC in Assam.

Meanwhile, India and Bangladesh on Saturday signed 7 pacts in core areas such as transport, connectivity, capacity building and culture.

Three projects involving the import of LPG from Bangladesh were also launched during the meeting.

“Both Modi and Hasina held detailed discussions in an atmosphere of great cordiality and warmth,” officials said.

Recognizing that terrorism remains one of the most significant threats to peace and stability of both countries and the region, the two Prime Ministers reiterated their strong commitment to eliminate terrorism in all its forms and manifestations, and stressed that there can be no justification whatsoever for any act of terror.

Both Modi and Hasina presided over the ceremony to exchange bilateral MoUs/ Agreements signed during the visit and also inaugurated three bilateral projects via video link.

Had an excellent meeting with PM Sheikh Hasina. We reviewed the full range of bilateral ties between India and Bangladesh. pic.twitter.com/16nquL9a2y

During the meeting, the two leaders expressed satisfaction at the excellent state of bilateral relations, based on deep historical and fraternal ties, which reflect an all-encompassing bilateral partnership based on sovereignty, equality, trust and understanding that transcends a strategic partnership.

“They held productive and comprehensive discussions during which they reviewed all aspects of the bilateral relations, and exchanged views on regional issues,” the official said.

Both the Prime Ministers agreed to fully utilize various opportunities for advancing mutually beneficial partnership in both conventional and non-conventional areas and to ensure that this irreversible partnership enhances the legacy that started with the Great War of Liberation of Bangladesh.

Hasina came to India on Thursday with a four-day-long official visit. She also attended the India Economic Summit organized by the World Economic Forum as the Chief Guest.