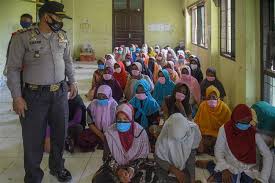 Thousands of villagers have reportedly fled their homes in Myanmar’s Rakhine state after a local administrator warned the village leaders that the army planned “clearance operations” against militants.

A government spokesman, however, said late on Saturday an evacuation order issued by border-affairs officials had been revoked.

The warning to the village leaders came in a letter written on Wednesday, which was seen by Reuters and verified by a state government minister, Colonel Min Than.

The letter, signed by the administrator of Rathedaung township, Aung Myint Thein, told village leaders he had been informed the operations were planned in the township’s Kyauktan village and nearby areas suspected of harboring insurgents.

The letter does not specify where the order came from, but Min Than, Rakhine state’s border affairs and security minister said  it was an instruction from his border affairs ministry, one of three Myanmar government ministries controlled by the army.

“Clearance operation will be done by forces in those villages,” the letter from the administrator said.

“While this is being done, if the fighting occurs with AA terrorists, don’t stay at the villages but move out temporarily,” it said, referring to the Arakan Army, the name of the Rakhine state insurgents.