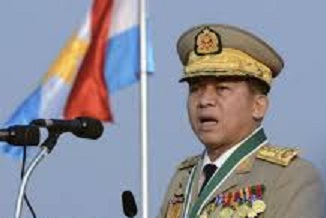 Myanmar authorities should immediately quash the convictions of five theatre performers for criticizing the military and drop all remaining charges against troupe members, Human Rights Watch said on Friday.

The five had been arrested for performing satirical slam poetry known as thangyat, a traditional vehicle for humorous criticism of topics from politics to social behaviour.

On October 30, 2019, a court in Yangon sentenced five members of the Peacock Generation Thangyat troupe to a year in prison for a performance that allegedly mocked the military, in violation of section 505 (a) of the criminal code.

“The military seems willing to dredge up any law in their boundless quest to silence their critics.”

Section 505 (a) of the criminal code makes it a crime to make any statement “with intent to cause, or which is likely to cause, any officer, soldier, sailor or airman in the Army, Navy or Air Force to mutiny or otherwise disregard or fail in his duty as such.”

Zayar Lwin, Paing Ye Thu, Paing Phyo Min, Su Yadanar Myint, and Nyein Chan Soe are also awaiting trial and face up to three additional years in prison on a second charge of ‘defaming’ the military under section 66(d) of the Telecommunications Law for live streaming their performance online.

The authorities have repeatedly used section 66(d) against those criticizing the government or the military online.

Speech critical of the government is increasingly subject to prosecution in Myanmar by members of Aung San Suu Kyi’s ruling National League for Democracy (NLD) as well as the military, Human Rights Watch said.

The same week, the chairman of the NLD’s Maubin township branch filed a criminal complaint under the same provision against Naing Zaw Oo, a cartoonist (known as ‘Ahtee’), alleging that he defamed the NLD and its local branch in social media posts criticizing the branch’s record.

Others who have faced charges recently for exercising their rights to free expression include the Burmese language editor of The Irrawaddy, Ye Ni, for reporting about military attacks in the town of Mrauk-U in Rakhine state, and a filmmaker, Min Htin Ko Ko Gyi, who has already been sentenced to a year in prison at hard labor under section 505(a) for criticizing the military’s role in politics on Facebook.

The United Nations Human Rights Committee, in its general comment on the right to freedom of expression, stated that the “mere fact that forms of expression are considered to be insulting to a public figure is not sufficient to justify the imposition of penalties.”

Thus, “all public figures, including those exercising the highest political authority such as heads of state and government, are legitimately subject to criticism and political opposition.”

“Myanmar’s government seems intent on jumping on the military bandwagon to crack down on freedom of expression,” Robertson said.

“Until Myanmar’s repressive laws are repealed or amended, military and civilian officials will be free to prosecute theater troupe members, cartoonists, and filmmakers just because they didn’t like what they saw, read, or heard.”