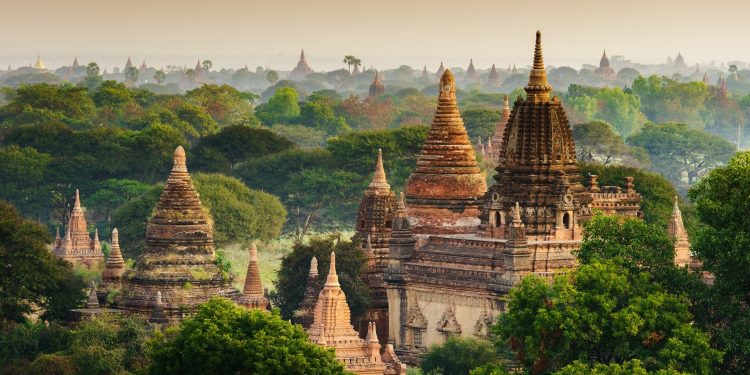 According to the site, the pair boasts more than 81,000 subscribers and over 35 million video views since they joined 11 months ago.

But the couple’s naked antics against one of Bagan’s ancient pagodas have been less than well-received in Myanmar, with condemnation spreading online.

But many express shock at how the Italian couple could shoot naked and even perform sexual acts in presence of temple priests and guards.

Some suspect they looked the other way during the filming because they were bribed.

It appears the usual crowds that throng Bagan were not around, maybe because the shooting was done after public hours.

The video in question had been viewed nearly a quarter of a million times by Thursday evening – but had registered twice as many dislikes as likes.

Mandalay chairman of the Union of Myanmar Travel Association Myo Yee joined the rising clamour, saying the case was bad news for an industry hit hard by coronavirus woes.

“It’s a difficult time for us because not many tourists are coming here,” he said.

An Indian diplomat in Myanmar also expressed anger   saying this was a classic case of Western perfidy.

“Can someone from Asia and film naked in Vatican,” he asked but was unwilling to be identified.

Indian archaeologists helped rebuilt many Bagan pagodas    including the revered Ananda Pagoda after they were damaged in an earthquake early in the last decade.

Prime Minister Narendra Modi inaugurated it after renovation during his 2017 visit to the country and prayed in both Ananda pagoda and at Shwedagon in Yangon.

The Indians funded the heat proofing of the Shwedagon’s public visitibg space for benefit of pilgrims.