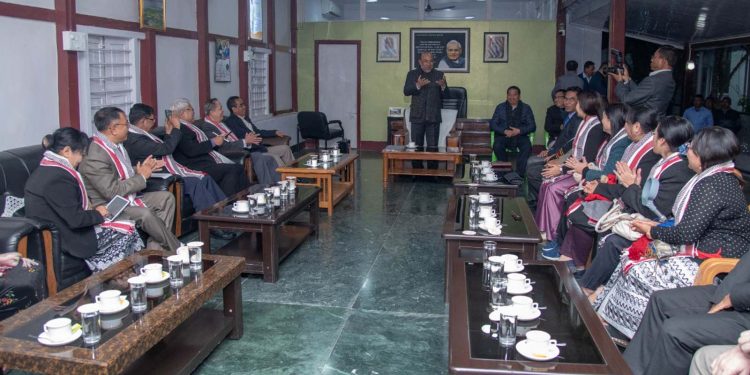 A delegation from Myanmar called on chief minister N Biren Singh on Wednesday at his official residence in Imphal.

The delegation is in Imphal, the state capital of Manipur, to participate in an international seminar.

The delegation was accompanied by senior faculty members of Manipur University during the meeting, says an official statement from the CM’s secretariat in Imphal on Wednesday evening.

The international seminar-cum-workshop on ‘Building Economic Corridors on the Trilateral Highway’ is being jointly organised by Manipur University and Monywa University of Economics, Monywa in Myanmar.

The CM expressed hope that the academics of Myanmar and Manipur would evolve policy designs and frameworks for development and co-operation between India and Myanmar in sectors like education, human resource development and border trade in the light of India’s Act East Policy.

Expressing that the governments must depend on academic inputs for any policy to be successful and fruitful in the new world, N Biren Singh also said he would pursue the recommendations of joint research programmes of the two universities.

He hoped the research programmes would help boost the trade and development co-operation between Northeast India and Myamnar.

A Memorandum of Understanding (MoU) on ‘Academia Exchange and Joint Research’ will be signed between the two universities on Thursday, the source added.