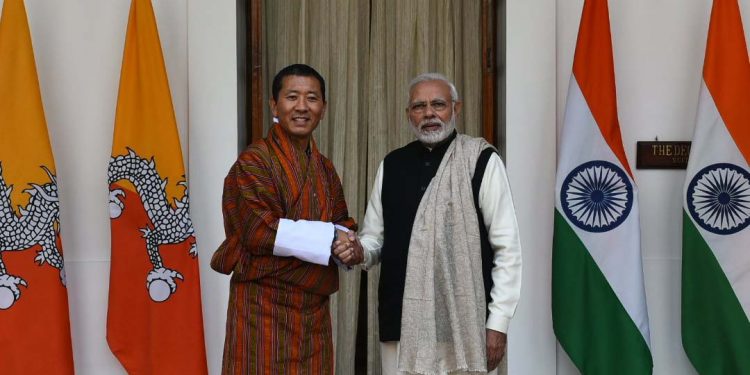 India would contribute Rs 4500 crore to Bhutan’s 12th Five Year economic plan which had began this year and will end in 2022.

The meeting was aimed to strengthen the friendship between India and Bhutan, reports TOI.

Modi assured Tshering, who took over as PM last month , that India would always help Bhutan and continue to be its good friend and partner.

Modi said that they had discussed about all the ongoing major projects and specially focused on the development of the Mangdechhu Project.

The Prime Minister of India said that they had agreed on the tariff for the Mangdechhu project and assured that its work will be completed soon.

The Mangdechhu hydroelectric project is a 720 MW run-of-river power plant being built on the Mangdechhu River in Trongsa Dzongkhag District of central Bhutan. Mangdechhu Hydroelectric Project Authority (MHPA), which is constituted by the Indian Government and the Royal Government of Bhutan, is developing the project.

Tshering , who said that hydropower has been the main source of revenue for Bhutan , acknowledged the Indian government’s commitment to lend full support to its neighbouring country.

“We are very happy that the government of India is fully committed to support whatever negotiations that are going on  for determining tariff  for power from Mangdechhu project as well as to make Sankosh (hydropower) project as soon as possible”, the Bhutan PM added.

India is delighted to welcome @PMBhutan Dr. Lotay Tshering. We had fruitful talks, focused on deepening cooperation in hydropower, space technology, economy and several other areas. Strong ties between our nations greatly benefit our citizens. pic.twitter.com/oNbDtuFbR4

Tshering and Modi reiterated their commitment to jointly develop 10,000 MW of hydropower generating capacity in Bhutan.

Tshering thanked Modi for assuring him of helping Bhutanese traders affected by the implementation of GST.