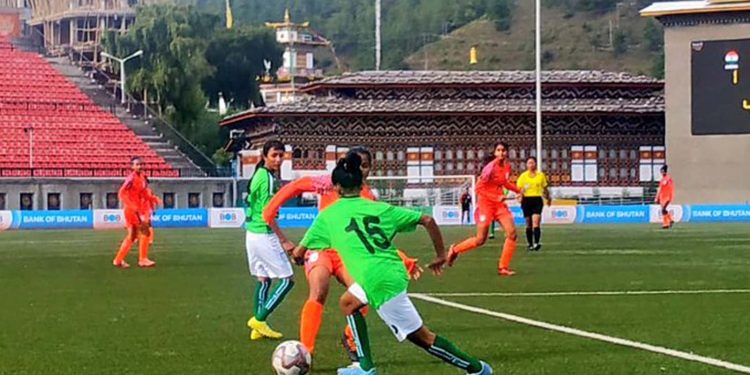 India were held to a 1-1 draw by Bangladesh at the Chalimithang Stadium in Thimphu, the national capital city of Bhutan on Sunday in the penultimate group stage match of the SAFF U-15 Women’s Championship 2019.

Amisha Baxla scored to put India in the lead in the first half, but her goal was soon cancelled out by Sapna Rani, as the two teams walked off the pitch with a draw.

India dominated possession from the start and looked to attack the Bangladesh goal, with Astam Oraon pulling the strings from the middle of the park, says an AIFF media team report.

It took the Indian girls 25 minutes to break the deadlock, as Astam found an unmarked Amisha through a cross from the left, as the latter finished it past the Bangladesh keeper.

However, the lead did not last long, as Bangladesh forward Sapna Rani latched on to a loose ball and chipped it over India custodian Adrija Sarkhel to equalise within a minute.

India kept probing in the Bangladesh area and Sai Sankhe, who scored a hat-trick in the second match against Bhutan, had what was perhaps the best chance of the game for India.

She was played through via an aerial through ball from fullback Jyoti Kumari and had only the keeper to beat.

However, her attempted chip went whiskers away from the far post.

Bangladesh came out with more determination in the second half and looked to create more chances.

However, the Indian defensive line held strong and thwarted the danger.

India slowly started to claw their way back in the game, however, as second half substitute Kiran looked lively down the left flank.

She created the best chance of the half with around 10 minutes of regulation time left on the clock as she marched down the left, and cut it back for Amisha, but the latter’s shot was straight at the keeper.

Lynda had another chance from a goalmouth scrap with a couple of minutes of regulation time left, but her reflex shot off a Bangladeshi block flew over the crossbar, the report said.

As both the sides took home a point each, both end on seven points in the group stage. However, India finish on top of the group by virtue of a greater goal difference.

India are now set to face Bangladesh again, in the final of the SAFF U-15 Women’s Championship at the Chalimithang Stadium on Tuesday, October 15, 2019.

The match is set to kick-off at 5.30 pm IST, and will be streamed live on www.mycujoo.tv, it added.

FULL-TIME! It's been a tough fight between the two sides, but both come out of the game with a point apiece ?