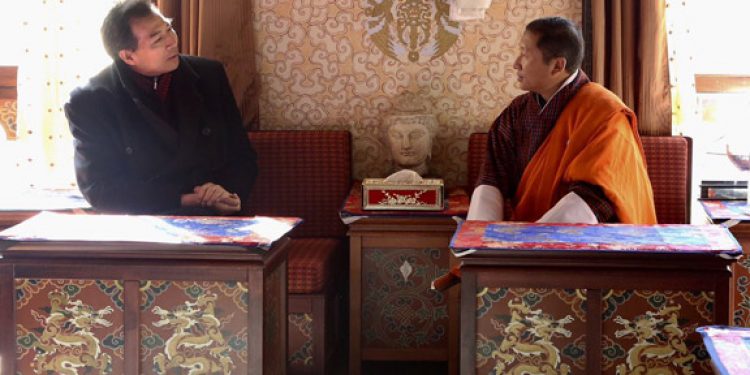 With Chinese ambassador to India Luo Zhaohui visiting Thimphu on Tuesday, it seems China seeks to intensify engagement with Bhutan.

A report published on Wednesday by TOI, China’s Bhutan outreach poses a significant foreign policy challenge for India in the neighbourhood.

It has been reported that the new government in Thimphu is likely to look at Beijing more and more as a potential partner in its efforts to diversify its economy.

Informing about the meeting, the office of the Bhutan foreign minister on its Twitter handle on Wednesday stated: “Hon’ble Foreign Minister met with H.E. Mr. Luo Zhaohui, Ambassador of China to India today morning coinciding with the visit of Inner Mongolia Cultural & Art Delegation from China.”

Luo Zhaohui will be accompanied by a cultural delegation from China which will perform on the occasion of the Chinese Spring Festival.

In its election manifesto, the DNT had stated that India’s share of trade with Bhutan accounted for 80 per cent of Bhutan’s total trade.

“We acknowledge the central role of hydropower sector in our economy, however, since it is a climate sensitive sector and considering possible geo-climatic hazards in future, it would be unwise to hinge the country’s economy solely on a single sector,” said the DNT manifesto.

Xuanyou also invited Bhutan to actively participate in the Belt and Road Initiative (BRI) and share China’s “development dividend”. Bhutan is the only Indian neighbour to have resisted the temptation so far to join BRI.

Bhutan is the only country neighbouring India to have resisted the temptation so far to join the BRI.

During PM Lotay Tshering’s visit to India last month, his first overseas tour after being elected as the PM, his counterpart Narendra Modi had announced that India would provide grant assistance of Rs 4500 crore for Bhutan’s 12th Five Year Plan, and a transitional Trade Support Facility of Rs 400 Crore over a period of five years to strengthen bilateral trade and economic linkages.

PM Tshering also invited Modi to Bhutan, but the Indian PM is yet to undertake that visit.