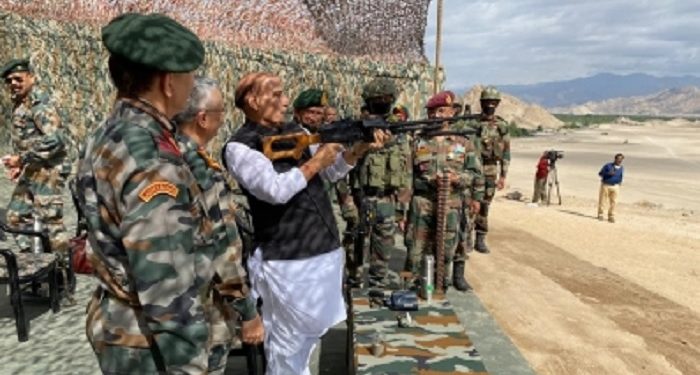 Union defence minister Rajnath Singh on Friday reached Ladakh to review the ground situation of troops at the hostile border areas with China.

Singh will also interact with the soldiers and review the operational preparedness of the force.

The minister, who is on a two-day visit to Jammu and Kashmir and Ladakh region, flew from Delhi to Leh early morning.

Sources said after reviewing the ground situation and interacting with the soldiers he would be flying for Srinagar later in the afternoon.

The minister would also interact with the soldiers injured in the barbaric attack carried out by Chinese People’s Liberation Army on June 15 last.

In the attack, India lost 20 soldiers and Chinese Army too had casualties.

Since the worst confrontation with China over the border issue, Singh had been ensuring that Indian armed forces are equipped with all the latest arms and materials and are logistically approachable at the borders. He had been meeting to all the stakeholders to ensure the force is ready for any confrontation.

Singh had earlier on July 3 planned to visit Leh.

However, he had to drop it as Prime Minister Narendra Modi decided to visit the forward location in Eastern Ladakh.

Currently, both India and China are engaged in military and diplomatic deliberation to de-escalate the tense situation at the border areas.

The countries are locked in 10-week-long standoff at multiple points, hitherto unprecedented along the border.

On Tuesday both countries military delegates held deliberations about disengagement and de-escalation of troops and materials at the borders in Eastern Ladakh for 15 long hours.