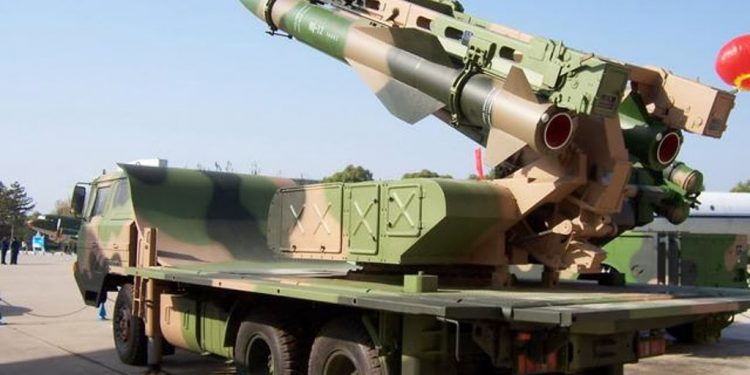 Ofiicials say Myanmar will also get some kinds of technology transfer for SY-400 along with some loan to cover as the result of prolonged discussions.

Missiles are factory-fitted into these containers and can be stored for years without requiring additional maintenance. Missiles are launched vertically and have a range of about 400 km. SY-400 can use different types of warheads.

SY-400 missile is equipped with GPS/INS guidance system. It is steered to the intended target in the initial flight phase by four control surfaces and stabilizing fins. The missile uses a low lowering rate to extend the range. Multiple missiles can be aimed at different targets.

The missile launcher units are mounted at the rear of on Wanshan 8×8 high-mobility military truck chassis. The truck is powered by a Deutz Diesel engine developing 517 hp. It can run at a maximum road speed of 75 km/h with a maximum cruising range of 650 km.

In December 2017, it was announced that Qatar Armed Forces has acquired SY-400 short-range ballistic missile system from China. The missile system was showcased the same year during the rehearsal of the Qatar National Day parade.

Bangladesh, with which Myanmar shares a border and with whom its relations are frayed over tge Rohingya refugee issue, is concerned.

“Myanmar will surely not use these against its own insurgents or against India. This could only be procured with us in mind,” said a senior Bangladesh diplomat here but on condition of anonymity.

UN investigators urged the international community end of last year to server ties with top Myanmar companies which finance the military in carrying out atrocities against Rohingya Muslims in the country’s western Rakhine state.

A UN fact-finding mission has released a report detailing the degree to which Myanmar’s military has used its own businesses, foreign companies and arms deals to support a brutal crackdown which has forced more than 750,000 Rohingya to flee to bordering Bangladesh.

“The revenue that these military businesses generate strengthens the Tatmadaw’s autonomy from elected civilian oversight and provides financial support for the Tatmadaw’s operations with their wide array of international human rights and humanitarian law violations,” said mission expert Christopher Sidoti, using the official name of the Myanmar Armed Forces.

Nearly 60 foreign companies have dealings with at least 120 businesses controlled by two military-owned firms, it said

“These foreign companies risk contributing to, or being linked to, violations of international human rights and humanitarian law. At a minimum, they are contributing to supporting the military’s financial capacity,” it said.

“In addition to isolating the Tatmadaw financially, we have to promote economic ties with non-Tatmadaw companies and businesses in Myanmar,” said Darusman.

It said 45 companies and organizations in Myanmar donated over $10 million to the military in the weeks following the beginning of the 2017 clearance operations in Rakhine State.

“Officials of these companies should be investigated with a view to criminal prosecution for making substantial and direct contributions to the commission of crimes under international law, including crimes against humanity,” Sidoti said.

The fact-finding mission team on Rohingya also called for a full international embargo on arms sales against Myanmar, revealing that a number of companies from seven countries have been supplying weapons to Myanmar’s military amid the humanitarian crisis faced by the minority group.

There are 14 companies from China, North Korea, India, Israel, the Philippines, Russia and Ukraine that have been supplying fighter jets, armored fighting vehicles, warships, missiles and missile launchers to Myanmar since 2016, said the report.

“These countries should have known that selling arms to Myanmar would have a direct adverse impact on the human rights of people in Myanmar,” it added.

The UN emphasized that arms transfer is contrary to the International Covenant on Civil and Political Rights (ICCPR) to which North Korea, Israel, Russia and Ukraine are all state parties, while China is a signatory.

It stressed that the named states have failed to effectively implement human rights effectively.

“Therefore, further investigation is required in connection with the nature of weapons or related items that Myanmar may obtain from two businesses based in Singapore, which are not parties or signatories to the ICCPR,” the report said.

“That is why we have called for an embargo that will send a clear message: Dealing with the Tatmadaw from today on will have international legal consequences,” Darusman said during a news conference in Jakarta.

The Rohingya, described by the UN as the world’s most persecuted people, have faced heightened fears of attack since dozens were killed in communal violence in 2012.

According to Amnesty International, more than 750,000 Rohingya refugees, mostly women and children, have fled Myanmar and crossed into Bangladesh after Myanmar forces launched a crackdown on the minority Muslim community in August 2017, pushing the number of persecuted people in Bangladesh above 1.2 million.