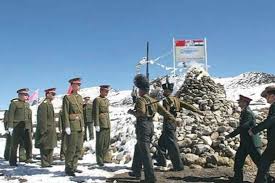 The People’s Liberation Army of China has suffered casualties in single digits so far during their brutal attack on Indian Army personnel at Galwan valley at the Line of Actual Control that has so far killed 20 Indian soldiers, sources claimed on Wednesday.

The Chinese outnumbered Indian soldiers in 1:5 ratio at the ridge by the Galwan river where the clashes took place for six to seven hours on Monday night.

The Chinese soldiers at patrolling point 14 where they were to make a deescalate operation, took on an India unarmed visiting patrol by surprise.

However, Indian Army has refused to comment on the number of Chinese Army casualties.

Source in a top intelligence agency stated that casualties on the other side are in single digit according to ‘analysis done so far’.

During the brutal clash, at patrolling point number 14 in Ladakh on the Line of Actual Control in eastern Ladakh, Indian Army troopers were outnumbered by 1:5 ratio when they came under attack from the Chinese People’s Liberation Army soldiers.

China’s PLA troopers savagely attacked Indian Army personnel, according to sources in the government having knowledge of the details of the Monday night clashes between the two army soldiers.