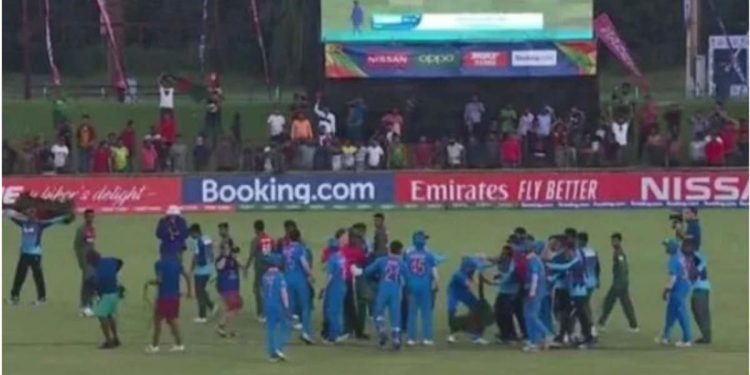 Three players from Bangladesh and two from India were sanctioned by the International Cricket Council (ICC) on Tuesday for their misconduct in the U19 ICC World Cup final.

As per reports, the players of the Bangladesh cricket team – Towhid Hridoy, Shamim Hossain and Rakibul Hasan- quarreled with their Indian counterparts after the U19 World Cup final in South Africa’s Potchefstroom on Sunday.

The Bangladesh team won the U19 ICC World Cup final.

After defeating India by 3 wickets in U19 WC, the players from Bangladesh stormed into the cricket field to celebrate their historic win.

Later, the players from both the Indian and Bangladesh cricket teams were found to be quarreling and pushing each other in the cricket field forcing the umpires to intervene and calm the players.

Hridoy, Hussain and Hasan from Bangladesh were handed six demerit points each for the Level 3 breach of the ICC Code of Conduct, which monitors the conduct of professional cricket players in various cricket tournaments.

Under the Level 3 category of the ICC Code of Conduct, cricket players, who indulge in assaulting team officials, spectators and team officials, use languages or gestures that hurt religious sentiments, have to face strict actions.

“It is disappointing that Code of Conduct charges needed to be laid after such a closely contested match, but it is important to reinforce the standard of behavior that will be expected of these young players should they transition to senior international cricket,” said Geoff Alardice, ICC general manager in a statement.

ICC also sanctioned two players from the Indian cricket team – Akash Singh and Ravi Bishnoi- for their rude behaviour against the cricket players from Bangladesh.

Akash Singh and Ravi Bishnoi were charged with violating Article 2.21 of the ICC Code of Conduct.

Ravi Bishnoi took a 4-wicket haul in the final and finished as the highest wicket-taker in the U19 World Cup,

Bishnoi was found guilty of using “language, actions or gestures which disparage or which could provoke an aggressive reaction from a batter”.

Bishnoi also received a further charge of breaching Article 2.5 of the Code of Conduct.

According to reports, all the charges against the players were levelled by on-field umpires Sam Nogajski and Adrian Holdstock, third umpire Ravindra Wimalasiri and the fourth umpire, Patrick Bongni Jele.