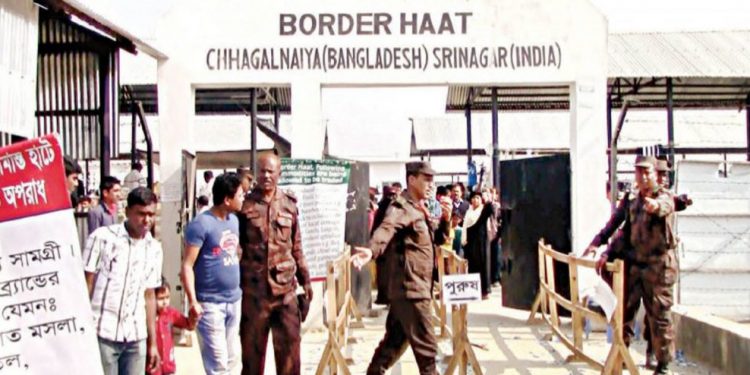 Economists of India and Bangladesh have sought immediate reopening of ”border haats” in Tripura and Meghalaya.

The economists from both the country while joining a webinar said that prolonged closure of these markets will lead to economic impoverishment of local people, which may force them to restart informal cross-border trade.

“Existing border haats along the India-Bangladesh border need to be re-opened at the earliest and after adopting appropriate precautionary measures related to health and hygiene,” said Bipul Chatterjee, executive director, CUTS International.

He further said that the border haats are important for maintaining and ensuring peace, security, stability and prosperity in the border regions where they exist.

There are four border haats along the Indo-Bangladesh border – two each in Tripura and Meghalaya.

These markets are now closed because of the outbreak of the Covid-19 pandemic.

Speaking at the webinar, Atiur Rahman, former governor of the Bangladesh Bank and Chairperson, Unnayan Shamannay, emphasized that the border haats have reinforced the narrative that cross-border trade leads to increased security and economic prosperity.

“Given the significance of the border haats in maintaining a vibrant economy at the local level, especially in remote border areas, border haats need to be reopened without any delay,” Rahman said.

Bangladesh Bank is the central bank of the neighbouring country.

Mohit Sippy, senior programme and policy manager, Asia Regional at the New Delhi office of the Department for International Development (DFID), said that border haats have a significant positive impact on the women living in the border regions.

“This needs to be up-scaled so as to empower and make them economically more independent,” Sippy said.

He emphasized on the role of the border haats in achieving greater cooperation between India and Bangladesh in areas where local communities are key drivers.

“Existing border haats along the India-Bangladesh border need to be re-opened at the earliest and after adopting appropriate precautionary measures related to health and hygiene,” said Bipul Chatterjee, Executive Director, CUTS International, a Jaipur-based think tank working on economic and public policy issues.

The CUTS International and the Unnayan Shamannay, a non-governmental research organization of Bangladesh, organized the webinar as part of a project supported by the United Kingdoms DFID under its Asia Regional Trade and Connectivity Programme on Thursday.

Rahman is also the chairperson of the Unnayan Shamannay.

Researchers of the CUTS International and the Unnayan Shamannay also presented their findings on “Border haats between India and Bangladesh as a tool to reduce informal cross-border trade between the two countries”, a statement issued by the organizers said.

Several other economists of India and Bangladesh also took part in the webinar on border haats.

”Border haat” is a once-a-week semi-formal market, which allows local people from both countries to trade in vegetables, fruits, spices, food items, agro-implements, cosmetics, toiletries, garments and other indigenous products.