Though most neighbourhood heads of states are invited to Modi's swearing-in ceremony this time, India is not inviting Pakistan Prime Minister Imran Khan. 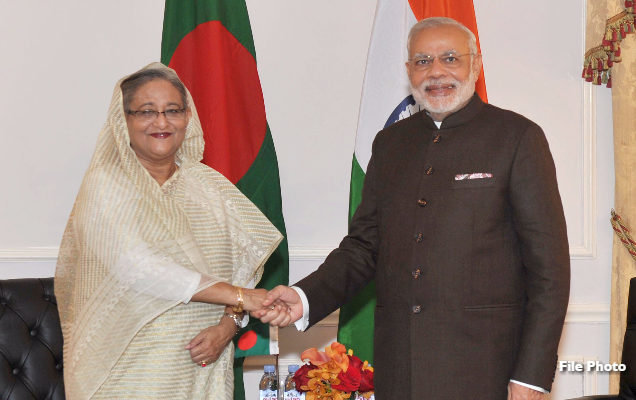 She may enjoy close personal rapport with Narendra Modi but for the second time Bangladesh Prime Minister Sheikh Hasina will miss out on attending the swearing-in ceremony of the Indian Prime Minister.

Now on a four nation tour of countries like Japan and Saudi Arabia, Hasina’s office has expressed her inability to the Indian High Commission after receiving the invitation to the swearing-in ceremony signed by Narendra Modi himself.

She missed Modi’s swearing in ceremony in 2014 because she was away on a trip to Japan.

Modi will be sworn in as Prime Minister for the second time at Rastrapati Bhavan in Delhi on May 30 evening.

Bangladesh president Abdul Hamid will attend the swearing in ceremony of Team Modi 2.0.

The country’s liberation war minister A K Mozzamel Haq will accompany President Hamid to Delhi for the swearing-in ceremony.

Haq’s ministry deals with those who fought the 1971 Bangladesh war as guerrillas alongside the Indian army. The liberation fighters, who share close emotional ties with India, enjoy many privileges in the country and the Modi government has also given them a new set of preferred treatment in allotment of visa and scholarships for their children.

Many other heads of state from India’s neighbouring countries like Sri Lankan president Mathripala Sirisena will attend the swearing-in ceremony of Team Modi.

Bangladesh is keen to take up the unfinished issue of Teesta water sharing with India once Modi takes charge again.

Sources in Bangladesh’s ruling Awami League feel Modi , who is keen on pushing the water sharing accord but has taken a cautious approach in view of west Bengal chief minister Mamata Banerjee’s opposition, may now feel encouraged to go ahead after Trinamool Congress suffered huge reverses in the recent parliament polls.

“If Modi can successfully push the Teesta deal through, that will enhance his popularity in Bangladesh despite all the anti Bangladesh rhetoric by BJP leaders during the poll campaign. It will also boost Hasina’s image and justify her reposing faith in India,” said Awami league veteran Amir Hossain Amu.

Though most neighbourhood heads of states are invited to Modi’s swearing-in ceremony this time, India is not inviting Pakistan Prime Minister Imran Khan.

His predecessor Nawaz Sharif had been invited to Modi’s swearing-in ceremony in 2014.