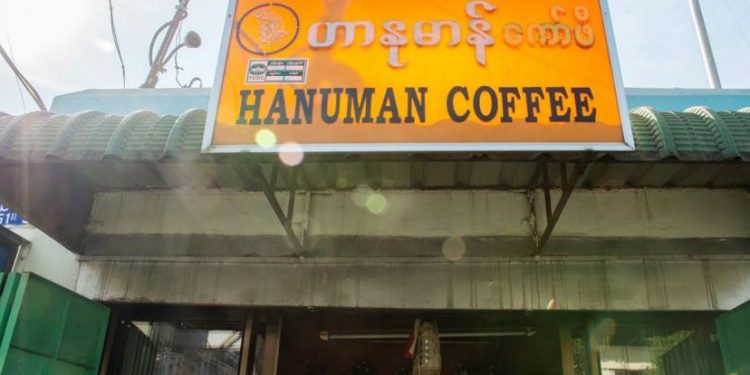 The largest city of Myanmar, Yangon which is a commercial and cultural hub of the country had seen many changes over the last 60 years.

But not the quaint Hanuman Coffee Shop that refreshes the senses of every passer-by near the shop with the delicious aroma of fresh coffee.

The coffee shop, which celebrated its 60th birth anniversary this year, has been attracting customers and rejuvenating weary souls from the same spot that first came to life in 1959.

The coffee shop had been selling the pure coffee powder in the environment –friendly brown paper packages imprinted with a logo of Lord Hanuman carrying the Sanjeevani mountain ever since its beginning in 1959.

As per reports, before Hanuman Coffee Shop came into being, the house used to be a store selling coffee tins and other household goods.

The former owner of the store sold it a person named U Thein Maung in 1959 before returning to India.

Maung , who was a Hindu religious leader at Sri Varatha Raja Perumal Hindu temple in Yangon, converted the earlier store into a coffee shop with a logo of Lord Hanuman carrying the Sanjeevani mountain.

With two orange coloured coffee grinding machines that had been imported from Europe long ago and brown packaging paper to pack pure powdered coffee to customers, the coffee shop has been doing brisk business from morning till evening since its inception.

Daw Rosalind Thein feels that selling pure coffee powder that is fresh and not mixed with any substances has been the secret of their flourishing business.

The coffee sold at the shop is sourced from the Shan highlands and Yenanchaung in Myanmar.

Today there are a number of FMCG companies competing with each other by manufacturing ready-to-eat food products that had been mixed with various chemicals and packed in plastic packages which in addition to polluting the environment are not healthy.

However, it is quite surprising that in the midst of all these big corporates fighting with each other to survive in the market, there stands a quaint and old coffee shop in a part of the world that sells the organic coffee powder in eco-friendly packages that had been luring customers in large numbers.

Yangon, previously known as Rangoon had seen a series of anti-Indian riots beginning in 1930 and mass emigration during the Japanese occupation of Burma followed by the forced expulsion of 1962 left ethnic Indians with a much-reduced role in Burma.