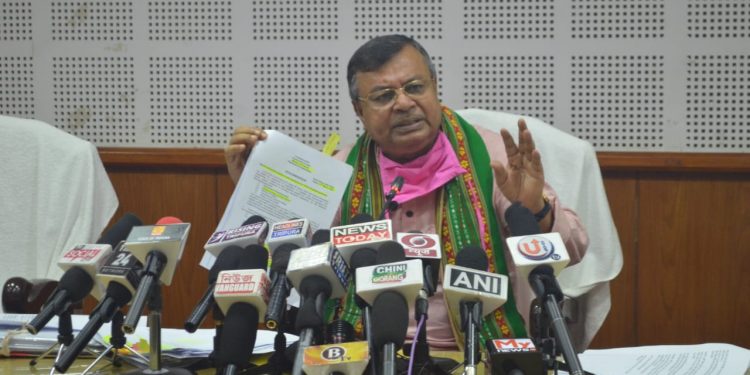 Tripura government has decided to go for aggressive COVID-19 tests in the State.

It has estimated that the government will do nearly 7000 tests per day till August.

The state Cabinet has taken the decision to increase the number of tests.

At present on an average 2000 tests are done in the State.

State law minister Ratan Lal Nath informed this and said the government has taken an attempt to cover the maximum population of the State regarding COVID-19 testing.

They can carry out COVID-19 tests even in the remote parts of the State.

Nath said, “There are altogether 138 PHCs and CHCs in the State and from now on the State Government has decided to engage all these infrastructures in mass testing of Covid-19”.

“We have decided to engage every single PHC and CHC in the job of testing. Each of the CHC and PHC will be directed to conduct 30 tests every day. Among them 25 test will be done through rapid antigen test kits and the rest 5 test through RT-PCR kit,” he said.

He added, “More than 4000 tests will be done every day from the PHC and CHC areas”.

Through Agartala airport every day nearly 500 passengers are coming to the State.

All the passengers will have to go for the COVID-19 tests, he said.

Testing will be done at the airport through RT-PCR kit.

Around 500 to 700 tests will be done at the entry points of the State such as Churaibari.

In Churaibari gate, the test will be done through a rapid antigen detection kit.

Nath further said, “In this way, we have a target of covering more than two lakhs people of the State on a daily average of 7,000 tests by one month.”

Not only this, from now the patients who will be admitted in any hospital in the State will go through the COVID-19 test and it is mandatory.

This procedure will maintain till August, the minister said.

On the need of lab technicians for the tests and other resources, he said, “It is almost certain that with increasing tests, there will be a need for the additional workforce.”

“If there is any requirement for lab technicians, the State Government will allow the hospitals to recruit lab technicians for a period on a flat honorarium structure of Rs 20,000,” he added.

Rationalization of manpower will also be done to achieve the targeted numbers, he added.

Nath also said three more machines would be installed along with the existing four machines to expedite the testing process and there would be testing facilities at Tripura Medical College, Udaipur and Dharmanagar very shortly.