Nagaland: Mon way ahead of other districts in fight against COVID19! 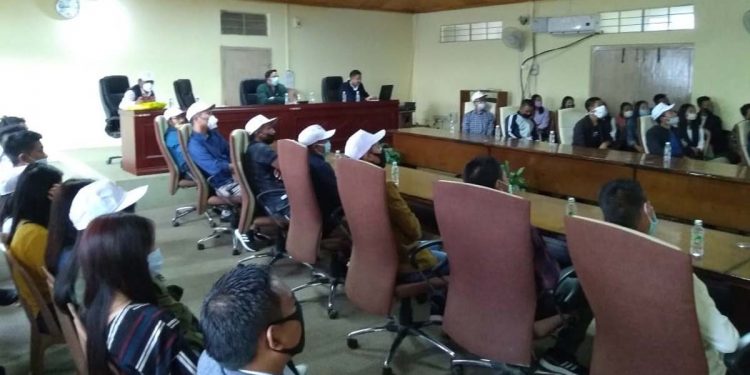 Mon district along Indo-Myanmar border in Nagaland is way ahead of other districts and even the state government in responding to the call to prevent and contain COVID19 pandemic.

The district administration, led by deputy commissioner Thavaseelan K. and other authorities have put in place a slew of measures and arrangements to combat the virus much before the other districts.

These measures were subsequently followed by other districts.

Mon District COVID19 War Room was set up at the District Rural Development Agency conference hall on April 10, four days before Nagaland governor R.N. Ravi suggested the same for all the districts on April 14.

Thavaseelan said to carry out the exercise in the district, 891 teams comprising village or ward level task forces, ASHAs, ANMs, Anganwadi workers and teachers were formed to ensure effective and holistic response to the crisis

Even though Mon district has not recorded any COVID19 positive case, the district war room adopted an “active case search strategy” on April 13 to prevent and contain the outbreak throughout the district.

Accordingly, each ward/village was divided into units of 50 households based on the recently concluded economic census, and a team of two conducted surveys on symptoms, travel history, contact with infected people, and so on.

Thavaseelan said the data collection for each and every single household in Mon district was completed on April 17.

It acts as a single point for information collection in addition to monitoring people under quarantine on a daily basis, he added.

He said four sub-divisional war rooms have been set up in Tobu, Aboi, Tizit and Naginimora sub-divisions to function as an auxiliary of and in tandem with the District COVID19 War Room.

The objective of the contact listing and tracing plan is to trace all suspected persons who have come in contact with COVID19 positive patients and quarantine/isolate them as the case may be.

The DC said the kiosk was constructed for the safety of the health workers.

It acts as a physical barrier between the patient and the health worker during the sample collection.

This kiosk will also reduce the use of number of PPE as the doctor collecting the sample from inside the kiosk does not require donning a complete PPE set.

COVID19 volunteers for Mon district were trained in the conference hall of the DC office in Mon on Thursday.

The training was conducted in two batches.

He said the volunteers were trained on the role they would need to play in delivery of essential commodities in the event of COVID19 outbreak in the district.