Medical consignment consisting of masks, hand gloves, sanitizers, medicines, test kits and other equipment arrives in Aizawl which were flown by AIF jet on Saturday 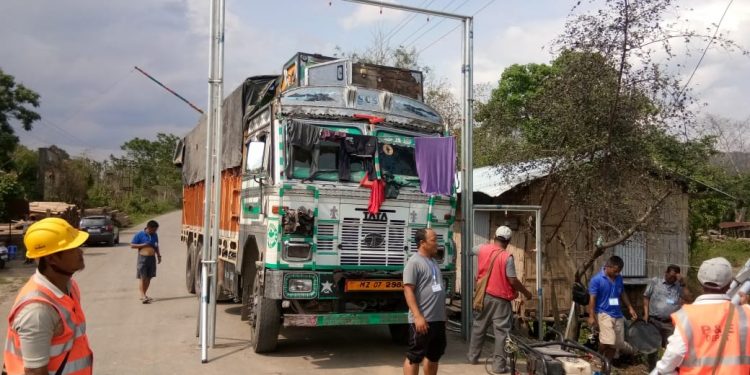 The chief minister announced in his Twitter handled on Saturday that disinfectant chamber has been installed at Vairengte to prevent the spread of novel coronavirus in the State.

“Cross-border #biosecurity disinfection Chamber installed at Vairengte, Mizoram to check the influx of the dreaded Covid-19 via inanimate objects and our essential commodities,” Zoramthanga said in a tweet.

“Sincere respect to all effort lenders,” he added.

Earlier on Thursday, the State Government also successfully installed disinfectant chamber at Bairabi on the state border with Assam.

Earlier the State Government had decided that all goods carrying vehicles would be sanitized with disinfectant at the border before entering the State.

In March, Mizoram has completely sealed inter-state border and international border barring two entry points – Vairengte and Bairabi along the state border with Assam, where only vehicles carrying both essential and non essential were allowed to enter.

The state shares inter-state border with Assam, Manipur, Tripura and also a 722 km unfenced international border with Bangladesh and Myanmar.

The government also made medical screening mandatory for drivers and handymen.

As per the new guidelines issued on April 16, all domicile drivers and handymen carrying essential goods and other permitted items into Mizoram from outside will be housed in government institutional quarantine facilities.

They will work from such quarantine facilities as long as they are involved in transportation and will be allowed to go home 14 days after their last service.

Drivers and handymen from other states carrying essential goods and other items will continue to be allowed cooking their meals outside the limits of towns and villages as a containment measure and they will immediately leave after unloading of goods without coming into contact with others, the guidelines also said.

According to the amended guidelines issued on Friday, a prior permission from deputy commissioner was made mandatory for intra-state transportation of goods already stocked in the State.

The State Government has also on Thursday launched a mobile app for truck drivers and handymen carrying essential goods from outside the state to ensure easy and safety transport during the lockdown.

The mobile app ‘mCOVID19’ will act as online pass for drivers and handymen.