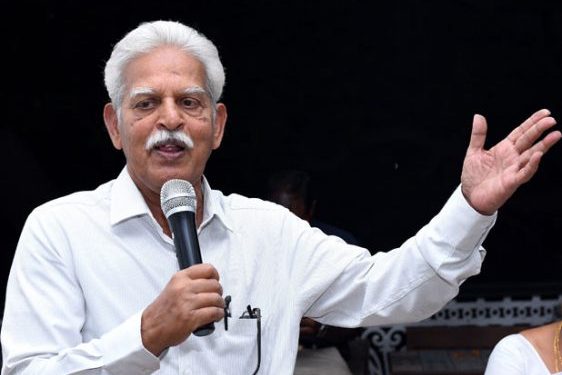 Rao is one of the prime accused in the Bhima- Koregaon and Elgar Parishad cases .

He was arrested by the Pune Police in August 2018 in connection with politically sensitive cases, along with around a dozen other activists from all over India, and has been lodged in the Taloja Central Jail, Raigad, for the past few months.

On July 13, he was taken to Sir J.J. Hospital in Mumbai for treatment of various illnesses and old-age related problems.

He also underwent a Covid test which turned out to be positive on Thursday, reports say.

Last week, his family in Hyderabad had held a press conference to raise concerns over Rao’s health, urging the government to provide necessary medical attention to him.

Rao’s family, including his wife P. Hemalatha, daughters P. Sahaja, P. Anala and P. Pavana, issued a public appeal from Hyderabad while several other human rights groups and individuals have also called for his release in view of his frail health.