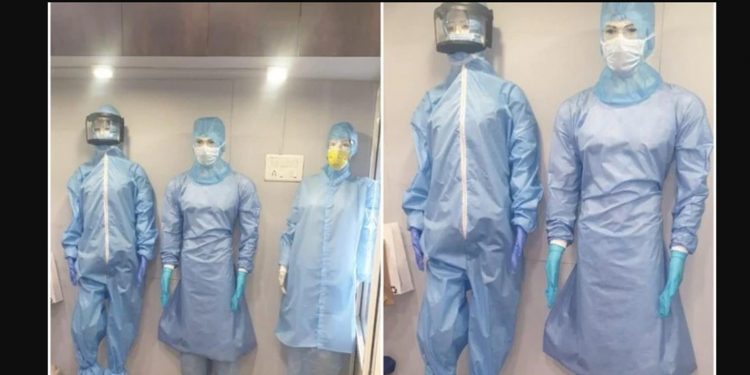 Indian Apparel export industry, which showed great agility in switching to production of Personal Protective Equipment (PPE) kits and scaling it up from zero units to eight lakh per day in less than four months, now wants to grab the lion’s share in the $60 billion global market.

“The entrepreneurial apparel industry under the leadership of Textiles Secretary Mr Ravi Capoor is prepared to play a key role in the global market for PPEs, which is estimated to be more than $60 billion over the next five years,” Dr Sakthivel added.

The industry, which was hit hard after the outbreak of coronavirus pandemic, has demonstrated extraordinary enterprise and nimbleness through its ability to rejig large production facilities to manufacture PPEs by re-purposing their production lines amidst a nationwide lockdown that disrupted material, labour and supply chains, he said.

The AEPC has requested the government to lift the ban on export of PPE kits.

It has sent letters to union commerce minister Piyush Goyal and Smriti Irani.

“Countries like Bangladesh, Indonesia, Pakistan and others have lifted the ban on PPE exports and are receiving huge orders. We are afraid to lose export markets to our competing countries. The production of PPE is more than sufficient to cater to the needs of the country and can be opened up for exports,” Dr Sakthivel said, adding that the US and Europe are the largest potential buyers.

Pakistan received $100 million export orders last week which is likely to go up to $500 million. Bangladesh has also aggressively protected global business from countries such as the US, Nepal, Sri Lanka and Kuwait while tackling the pandemic, he said.

The Embassy of Vietnam in Washington has established a channel of communication with the Center for Disease Control and Prevention and the US Department of Health and Human Services.

The US Federal Emergency Management Agency has created an ‘air-bridge’ to quickly get medical supplies like 2.25 million PPEs exported from Vietnam, he said.

“India is also part of the US ‘air bridge’ initiative. We should not lose out on an attractive global business opportunity and the need of the hour is to initiate PPE exports. India should consider the economic and political dividends that timely PPE exports will generate in the post COVID-19 era,” Dr Sakthivel added.