Assam: The Jorhat connection to hydroxychloroquine 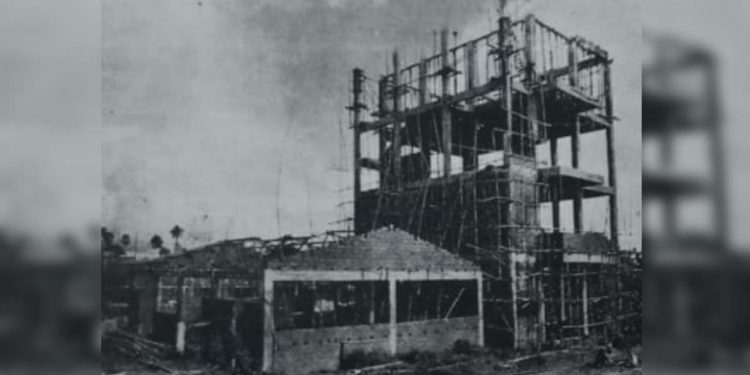 Photo of the construction of the chloroquine plant. Image credit - Northeast Now

In the absence of a known treatment for COVID-19, the doctors have taken to experimentation with hydroxychloroquine, a potent drug which is used to treat malaria cases.

The demand of the drug suddenly increased globally after the American President, Donald Trump sought export of the anti-malaria drug chloroquine from India to cure Covid-19.

Jorhat has a connection with the erstwhile Bengal Immunity Company Limited, the only government undertaking in India, later merged with Bengal Chemicals, which produces anti-malarial drug, chloroquine phosphate / hydroxychloroquine.

Way back in 1981-82, the Bengal Immunity Company had sought the help of CSIR North East Institute of Science and Technology which was then known as the Regional Research Laboratory, Jorhat to upgrade the BIC’s chloroquine plant which became economically unviable at that time.

Dr PG Rao, ex-director of North East Institute of Science and Technology, who was then a scientist at RRL, said a team including him, under the leadership of Dr KV Raghavan, provided the basic design for the new technology that could produce 80 tons of chloroquine phosphate per annum.

“Dr BN Goswami of Chemistry Division and I had visited Bengal Immunity Company at Calcutta at that time for demonstration and participating in commissioning trials during its implementation phase,” Dr Rao told Northeast Now over the phone from Hyderabad.

Dr Rao is currently working at CSIR Indian Institute of Chemical Technology at Hyderabad in Telangana as a CSIR distinguished scientist.

“Bengal Immunity Company as it was then known had started the production of chloroquine during World War II,” Dr Rao said.

“BIC’s plant had become obsolete by the 80’s as it was producing only 4 tonnes of chloroquine per annum,” he said.

“After they had asked RRL for revamping and modernization of the process, we modified the process, developed the modified technology and provided basic design for a plant, which could produce 80 tonnes per annum.”

“But the commercial plant was built by a Calcutta based engineering firm Krebs and Sie Ltd., and was commissioned around 1992,” Dr Rao further said.

Dr Rao said in Asia it was the biggest plant at the time to produce chloroquine phosphate, which was used as an anti malarial drug.

“Bengal Immunity Company, later merged with Bengal Chemicals, can produce hydroxychloroquine after certain modifications to the structure,” he further said.

Hydroxychloroquine /chloroquine is under investigation by various research groups for effectiveness in treating SARS Cov-2, the virus which is causing the novel coronavirus pandemic.