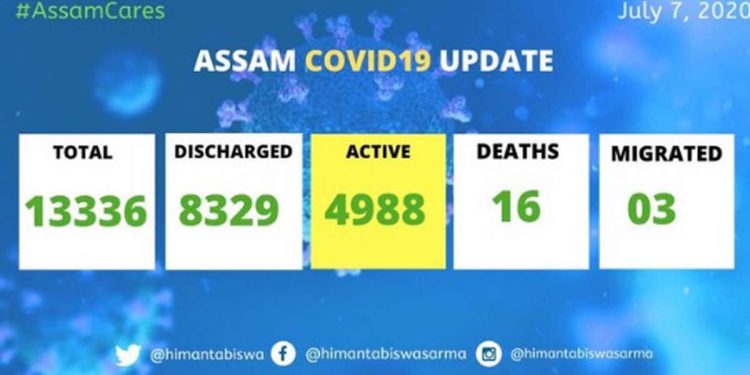 Confirming the news, Assam health minister Himanta Biswa Sarma in his latest tweet on the state’s COVID19 status said out of the 814 new positive cases, 588 are from the Guwahati city alone.

Stating that the “numbers are not encouraging”, the health minister added, “Self-control is critical.”

With the new cases, the total number of active COVID19 cases in Assam now stands at 4,988.

Earlier, a total of 8,329 COVID19 patients have been discharged from various civil, district and model hospitals across Assam while 3 cases have migrated from the state.

On Tuesday, two persons including a woman died of COVID19 in Assam, taking the state’s death toll to 16.

The first victim, identified as 40-year-old Dhadaram Mura was from Koliabor in Nagaon district while the woman victim from Kamrup district was identified as Devi Kakati.

In another tweet, the state health minister said:  “I have said it numerous times – and repeat it again – Testing is the finest prevention to stop march of #COVID19 and eliminate this scourge. My team conducted about 14,000 more tests today, taking the total too 485,156.”

Numbers are not encouraging. Self-control is critical.