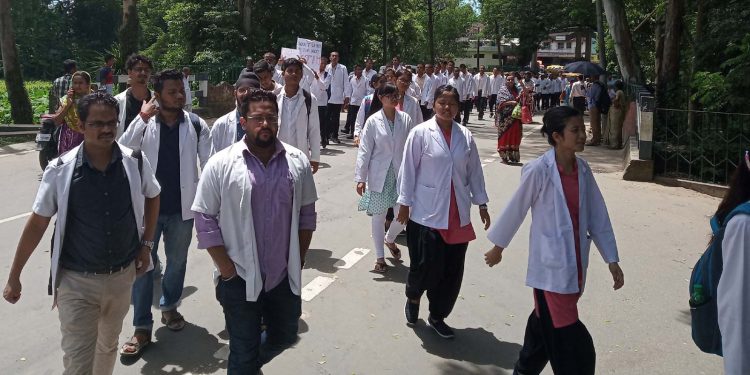 Protest rally taken out by junior doctors and students of SMCH against killing of Dr Deben Dutta at Teok. (File image)

The 73-year-old physician, who was assaulted by the labourers of Teok Tea Estate in Jorhat district, succumbed to his injuries on Saturday.

The essential services and academic sessions in the SMCH were affected due to the protest.

The services in OPD and mini OTs were hit as the junior doctors along with medical students and other doctors of the hospital staged a sit-in protest in front of the entrance gates to the OPD.

However, the emergency services were not affected.

While chanting slogans like “We need security” and “Hum Hamara Hak Mangte, Nahi Kisi Se Bheek Mangte”, the agitating doctors demanded security of their profession as well as the hospital premises.

The protestors said they don’t want to witness any of their colleagues die pathetically just like Dr Deben Dutta at Teok.

One minute’s silence was also observed paying solidarity to the departed soul of Dr Deben Dutta.

Later, a rally was taken out within the SMCH campus by the junior doctors and students demanding their security.

Dr Tinku Borah, president of Post Graduate Trainee Association (PGTA), who hails from Jorhat, told Northeast Now, “We don’t have any intention to stop medical services and protest as our role is to serve the mankind, which we are doing.”

“We don’t want any favours or help, but, we can definitely ask for our security,” said Dr Borah.

“But killing a doctor like Dr Deben Dutta, whom I knew personally, is more painful,” he added.

“He retired 13 years back and was serving the garden without any salary. It is hard to believe how one can kill such a person,” said Borah.

Saying that their security is tantamount to the service that they are providing, Bora said, “The zeal to become a doctor and take active part in this profession has weaned.”

“Not only that, the civil society should come forward and speak for our security and give us a secure environment to work for the betterment of the communities,” said Dr. Chakravarty.

Speaking in the same line, the general secretary of SMCH Teachers’ Association, Dr Prasenjit Ghosh said, “We work in very trying conditions and very remote areas. Our security and the security of our establishment have become very essential these days.”

“For the gruesome death of Dr Deben Dutta, we stopped the essential services today, but, if things don’t pan out in our favour, we have to stop even emergency services in the days ahead,” Dr Ghosh said.

When asked about the security issues inside the hospital, SMCH principal Dr Babul Bezbaruah told Northeast Now, “Our associations have approached the State governments as well the Centre to provide medical task force for security of our doctors as well as our establishments.”

Dr Bezbaruah also said, “We are just like chengfish, which is very easy to catch and become soft targets of any casualty.”

“I must thank the doctors that we never re-attack, but, if the government seriously does not think about having such forces, such sort of brutal incidents would keep happening time and again,” Dr Bezbaruah added.