After the COVID-19 positive case of Spanish Garden, the posh apartment in Guwahati hit the headlines, people are showing exemplary courage to declare their status.

A close friend of victim Manish Tibrewal, Gurpreet Singh Uppal has set an example to emulate. 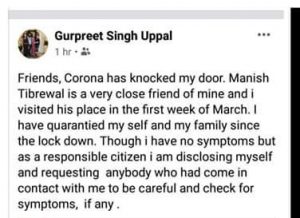 Uppal has taken to social media platforms to intimidate that he had visited Tibrewal at his Spanish Garden residence in the first week of March.

He also said he had quarantined himself and his family since the lockdown.

“Though I have no symptoms, but as a responsible citizen I am disclosing myself and requesting anybody who has in contact with me to be careful and check for any symptoms, if any,” wrote Uppal in his Facebook page.

Uppal and his family are presently quarantined at Birubari centre.

At a time when allegations are rife that several people of Assam who had recently attended the religious congregation of Tablighi Jamaat at Nizamuddin in Delhi have gone underground, such positive steps are really encouraging.