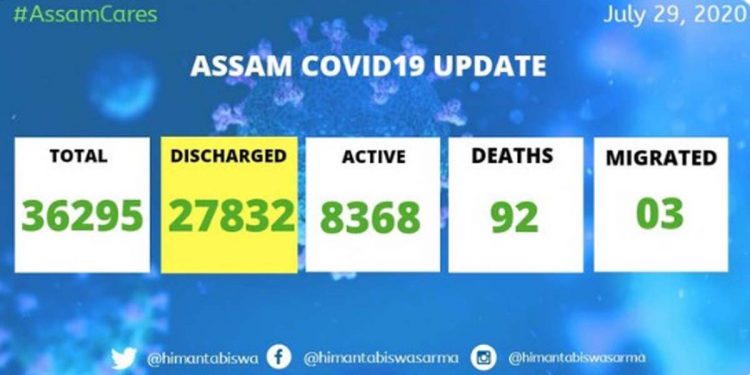 On the day when Assam’s COVID19 tally stands at 36,295, a total of 1,214 patients, who were earlier infected by the virus, have been discharged from various hospitals across the state on Wednesday.

Lauding the doctors of the state for the achievement, health minister Sarma tweeted: “Happy to share that our recovery rate is 76.77%~ purely a result of dedication & selfless service of our doctors.”

Happy to share that our recovery rate is 76.77%~ purely a result of dedication & selfless service of our doctors ?

With the release of 1,214 patients, the total number of COVID19 patients discharged from the hospitals in Assam now stands at 27,832.

Confirming the news, Assam health minister Himanta Biswa Sarma in his latest tweet on the state’s COVID19 status said a total of 18,941 tests were conducted in various laboratories across the state in the last 24 hours, out of which 1,348 were found positive for COVID19.

Sharing the news, health minister Sarma in an earlier tweet on Wednesday said the positive patients, who lost the battle against COVID19 pandemic, are from Cachar, Tinsukia and Jorhat districts.