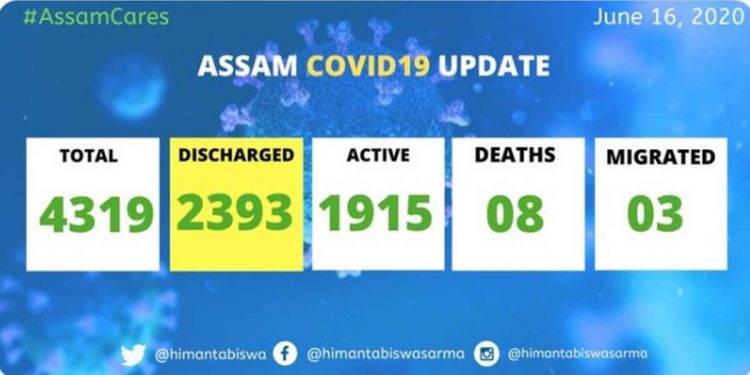 While the Covid19 positive cases in Assam have touched 4,319-mark, a total of 188 patients, who were earlier infected by the virus, have been discharged from various hospitals of the state on Tuesday.

Sharing the good news, Assam health minister Himanta Biswa Sarma in a tweet on Tuesday evening said the Covid19 patients have been discharged from various civil, district, and model hospitals in Assam after they tested negative.

With the release of 188 more patients, the total number of discharged Covid19 cases in Assam has risen to 2,393.

Currently, the number of active Covid19 cases in the state stands at 1,915.

The deadly disease has claimed the lives of 8 persons in Assam so far while 3 cases have migrated from the state.

The total number of Covid19 positive cases registered in India has crossed the three lakh-mark as the country, for the first time ever, has become one of the four nations in the world with the highest COVID19 cases.

Glad to share that 1?8?8? patients have been discharged today from various civil, dist & model hospitals in Assam, after being tested negative