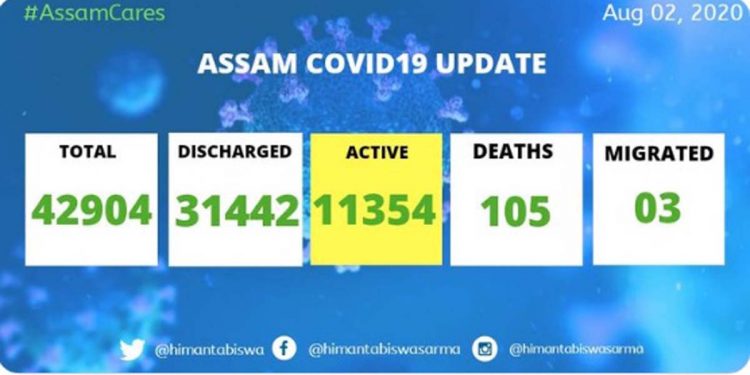 Confirming the news, Assam health minister Himanta Biswa Sarma in a tweet on Sunday night said the new 1,178 positive cases have been detected out of 19,943 tests conducted in the last 24 hours.

“We have been able to maintain a low positivity rate consistently (today- 5.91%),” health minister Sarma tweeted.

The health minister informed that of the total positive cases detected on Sunday, Kamrup Metro district has reported 268 cases.

With the new cases, Assam currently has 11,354 COVID19 positive cases.

A total of 31,442 patients, who were earlier infected by COVID19, have been discharged from various hospitals or Covid Care Centres across Assam after they tested negative for the virus.

The deadly disease has so far claimed the lives of 105 positive patients.

Sharing the news, health minister Sarma in an earlier tweet on the day said the COVID19 victims are from Karimganj, Kamrup Metro, Tinsukia, and Jorhat districts.

The health minister has expressed his condolences to the families of the COVID19 victims.

We have been able to maintain a low positivity rate consistently (today- 5.91%)