Arunachal Pradesh has registered 179 new COVID19 cases in the last 24 hours, taking the state’s total tally to 13,348 while the death toll increased to 30.

According to the latest bulletin on COVID19, released by the Arunachal Pradesh health department, the new cases have been detected in 22 districts.

Of the new cases, the Itanagar Capital Region (ICR) has reported the highest number of new cases at 77.

Meanwhile, 244 more patients have been discharged in Arunachal Pradesh after their recovery from the disease.

The patients have been discharged from 17 districts.

From ICR, a total of 85 patients were discharged.

With these patients, a total of 10,315 patients have recovered from the disease in the state. 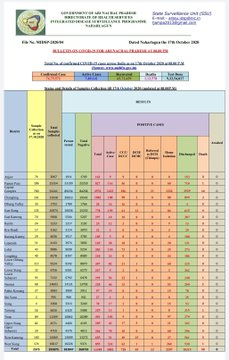