The Railway Protection Force (RPF) personnel of NF Railway during raids in trains have recovered contraband items including smuggled goods, arrested an illegal travel agent in the last 3 days.

The RPF personnel have also rescued a minor girl from Guwahati railway station.

Later, a consignment of 6.2 kg of ganja was recovered from the bag.

The consignment was later handed over to the superintendent of Customs, Dimapur, the CPRO informed.

In another case, the RPF personnel under NFR recovered 2 unclaimed bags from the circulating area of Agartala station at about 10-45 pm on January 30 when luggage checking of the passengers of train No 05626 DN was going on.

Later 8 packets containing ganja were recovered from the bag.

“In the course of the search, 11 railway e-tickets, generated by using personal user ID for different persons on different dates and different trains, were recovered,” Chand said in a statement.

The total value of the recovered e-tickets was Rs. 14,235 and all were past tickets. 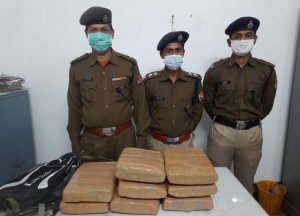 “On being asked the owner of the agency failed to produce any document and satisfactory reply for the recovered railway e-tickets and he confessed his guilt,” the NFR official said.

On January 30, 2021 while RPF lady head constables Anju Devi and Sangita Mandal were performing their duty at the main entrance gate and concourse area of Guwahati railway station at about 7:45 am, they noticed one minor girl moving alone in the concourse area in distressed condition, the NFR official informed.

On being asked, the minor girl, aged about 16 years, revealed her name, address and stated that she had fled from her home at Moran under Sivasagar district without intimating her parents in search of job in Guwahati.

The rescued minor girl was then brought to the RPF Post in Guwahati railway station and her relatives were informed over the mobile phone.

“After observing all formalities, the rescued minor girl was handed over to the Railway Childline Guwahati for her safe custody,” Chand further informed.