Why golden tiger of Kaziranga is not a cause of celebration 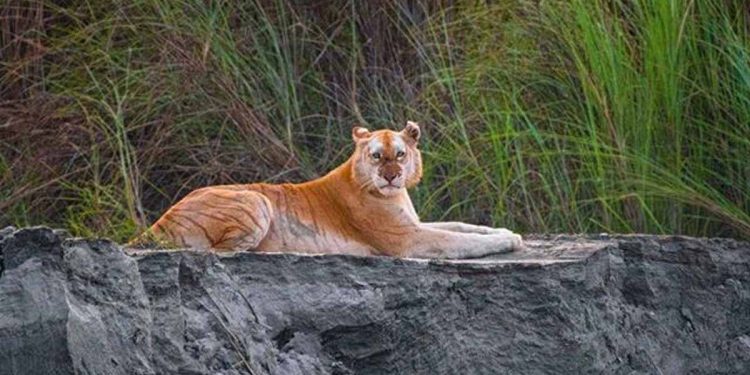 On July 11, a photograph of a tiger from Kaziranga National Park (KNP), which was shared by IFS officer Parveen Kaswn, went viral on social media.

The big cat was called the “golden tiger” for its golden colourisation and in no time the spotting of the animal spread like wildfire.

However, the euphoria surrounding the tiger was short-lived as KNP officials informed that there are three more tigers bearing the same colourisation in the park.

Further, the officials added that the golden colour was nothing to celebrate as far as the future of the tigers was concerned.

The officials said that the golden colour of the tiger was an example of unusual colour aberration, which could have been a result of excessive inbreeding caused by habitat destruction and loss of connectivity.

The officials further added that the recessive genes were showing due to the inbreeding within a fragmented population.

Quoting a document shared by KNP director P Sivakumar, Deccan Herald reported, “With lighter yellowish skin, lighter black stripes and more whitish expressions in the abdominal and in the facial region- was first photo-captured in 2014. he was camera trapped in 2015, 2016, 2017 and later also.”

However, IFS officer Kaswan claimed that the tiger was photographed in April this year by Mayuresh Hendre- a Mumbai-based wildlife photographer.

Do you know in #India we have a Golden #Tiger also. Only documentation of such big cat in 21st century on planet. This by Mayuresh Hendre. Look at this beauty. pic.twitter.com/8kiOy5fZQI