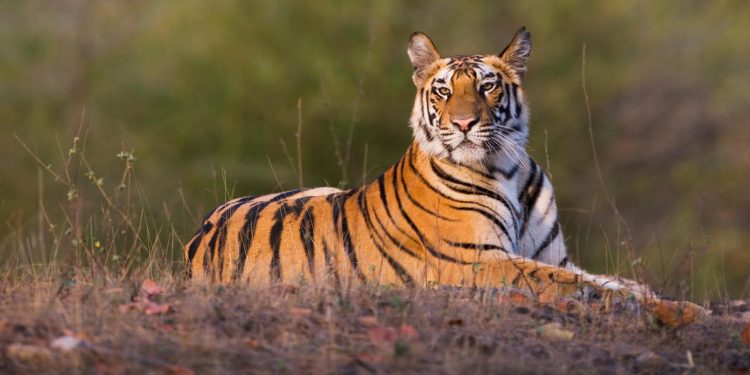 Tiger population in north-eastern hills and Brahmaputra landscape along with four other landscapes across India have witnessed a marginal increase in the latest Status of Tigers in India-2018 report.

From 100 in north-eastern hills and Brahmaputra landscape in 2006, the number of tiger population in 2018 went upto 219.

The report that was released by union environment minister Prakash Javadekar in New Delhi has said that India has 70 per cent of the world’s tiger population.

Also read: Why golden tiger of Kaziranga is not a cause of celebration

The minister said India is tirelessly working with all 13 tiger range countries towards nurturing the tiger.

The tiger population in India continues to increase, this rise is observed in areas with substantial and good management inputs, complementing India’s conservation efforts.

The populations of conservation priority based on genetic distinctiveness, diversity and vulnerability were identified as those of Northeast Hills, Southern Western Ghats, and tigers of Odisha and Valmiki.

Of these, Southern Western Ghats and Valmiki populations 14 have shown improvement, while those of Northeast Hills and Odisha remain critically vulnerable and need immediate conservation attention.

The tiger reserves of Nameri and Pakke have registered declines, while tigers have not been recorded in Buxa, Palamau, and Dampa in this assessment.

The National Tiger Conservation Authority (NTCA) in collaboration with the State Forest Departments, Conservation NGOs and coordinated by the Wildlife Institute of India (WII), conducts a National assessment for the “Status of Tigers, Co-predators, Prey and their Habitat” every four years since 2006.

The Tiger Task Force appointed by the Hon’ble Prime Minister of India in 2005 mandated a four yearly monitoring of tiger populations across India based on the methodology developed 2 by the Wildlife Institute of India.

The first status assessment of 2006 was peer reviewed by International experts and the IUCN.

The information generated by the earlier three 3, 4, 5 cycles of tiger status evaluation exercises resulted in major changes in policy and management of tiger populations.

The fourth cycle of National tiger status assessment of 2018-19 is the most accurate survey 2 conducted.

The survey covered 381,400 km of forested habitats in 20 tiger occupied states of India.

A foot survey of 522,996 km was done for carnivore signs and prey abundance estimation.

In these forests, 317,958 habitat plots were sampled for vegetation, human impacts and prey dung.

Camera traps were deployed at 26,838 locations.

Maintaining the source values of tiger reserve populations through good management, protection and making the core areas inviolate through incentivized voluntary relocation of human habitation has been the most important reason for continued improvement in the status of tigers in India.

These habitat corridors are often threatened by development of linear infrastructure.