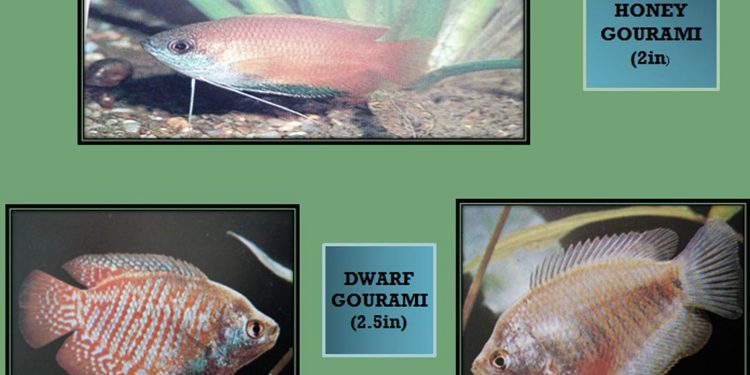 India’s northeastern states have very unique natural and geographical features ranging from the high altitude terrain of the eastern Himalayas to the Brahmaputra flood plains and rain forests to vast wetlands.

Ornamental fishes live in different water bodies in different ecosystem from cold water to warm water in India’s Northeast region. Pond, paddy field, channel, wetland, rivers are main habitat of native ornamental fishes in this region. Lakhimpur district, on the foothills of eastern Himalaya of Arunachal Pradesh in Assam’s northeastern corner, has been an ideal habitat for many ornamental fishes found in nature.

The district, which is situated on the north bank of the Brahmaputra, has three big rivers —Subansiri, Ranganadi and Dikrong. A large number of tributaries from these major rivers flow through the district. Lakhimpur district also has 40% its area as flood plain and is covered by seasonal and perennial wetland.

All the rivers, tributaries and wetlands are very rich in indigenous fish diversity in the district. The presence of mild ecological condition allows the habitation of abundance of ornamental fishes in nature and it has 35 different species of ornamental fishes found in diverse natural water bodies. But due to natural calamity and manmade disasters degradations are experienced in various water bodies, mostly the wetlands and riverine swamps called ‘beels’ and their ecosystems.

Bikul Goswami, a nature conservationist and fish breeder from North Lakhimpur in Assam’s Lakhimpur district, has been studying and documenting the ornamental fish species in this region for the last three decades.

Goswami, who also runs an aquatic farm in Seajuli under Kadam Revenue Circle of Lakhimpur district, is worried about the threat faced by these species in recent times.

According to Goswami, the major threat faced by the native ornamental fishes in this region is from natural calamity like earthquake. The eastern Himalaya region is a red seismic zone in Asia which saw a devastating earthquake in 1950. Any more such calamity could greatly upset the natural eco-system of the ornamental fishes in this region, he feels. Human interference in nature and wanton destruction of natural ecosystems like using nylon net for fishing, poisoning of water bodies, blasting and deforestation have been frequently done in all major natural water bodies of the district stretching from the hills of Arunachal Pradesh to the banks of the Brahmaputra.

The uncontrolled use of pesticides and inorganic fertilizer in agriculture fields of the district has also caused great harms to the ornamental fishes among all other things. The coming out of mega hydropower dams on rivers in Arunachal Pradesh is another worry as observed by Bikul Goswami for the existence of the ornamental fishes in this region.

In a bid to preserve and promote the native ornamental fishes Bikul Goswami has been relentlessly working for captive breeding of the exotic species in the last three decades. For that he has been for the promotion of indigenous medicinal herbs for the management of ornamental fish diseases. He has also been consistent in immune-modulation; quarantine the fishes, observing the behaviour of the fishes in captivity, artificial feeds, maintaining the proper coloration of fishes in captivity in his aquatic facility.

So far, the market of ornamental fish to the global demand has been largely unorganized and lacks any agency for its promotion. Lack of proper packaging and transportation is also another challenge to this potential trade.  The trading of ornamental fishes in this region is mainly based on natural collection. The fishes are collected form the wild habitat and marketed by traders who actually control the activities. It has been observed that collection of ornamental fishes takes place in large number during the pick season. The indiscriminate exploration of ornamental fishes from natural sources may lead to extinction of some of the rare varieties of them. Further, there is an inherent danger of certain species disappearing from the region. If the present mode of exploration continues unabated, it is high time to take immediate measures to conserve this natural wealth.

(Sazzad Hussain is a freelance writer and independent researcher based in North Lakhimpur, Assam)