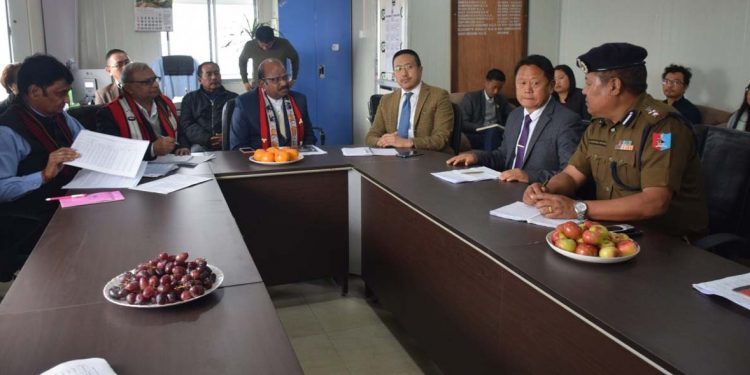 A team of National Commission for Safai Karamcharis led by its chairman Manhar Valjibhai Zala held a review meeting on Monday.

The review meeting was held with the state government officials to discuss the welfare schemes/programmes meant for safai karamcharis of Kohima Municipal Council in the council conference hall on Monday.

Various issues regarding socio-economic and educational uplift of the safai karamcharis were discussed in detail during the meeting.

Zala highlighted the various welfare schemes that have been put in place by the central government to ensure that the safai karamcharis get equal opportunity for development at par with the rest of the citizens.

He stressed the need for proper implementation of the laid down rules of the National Commission for safai karamcharis with regard to the employment of the safai karamcharis and also the need to set up district-level committees in every district to monitor their welfare.

A number of issues regarding the minimum wage of workers, pension schemes, medical benefits, education of the children of the workers, accommodation for the workers, working conditions and facilities were discussed at length during the review meeting.

Later, Zala and his team held a meeting with the representatives of safai karamcharis, ward members and Green Team Kohima, NGO.

Speaking on the importance of the welfare of safai karamcharis, Zala asserted that the cleanliness has become a competition in the country with the initiative of Prime Minister Narendra Modi considering health as wealth.

He added that cleanliness should come before the doctor.

He pointed out that safai karamcharis are the people who work day and night, putting their lives in risk to protect the nation from diseases and germs with their limited wages.

Zala said the purpose of his visit was to know the grievances of the safai karamcharis who have not been heard for many years and to discuss the welfare schemes and programmes meant for them and other related issues.

He also interacted with the safai karamcharis and noted their grievances.

Zhimomi urged the visiting team to provide proper health care assistance and minimum wages to the safai karmcharis to enable them to live a respectable life.

Zala said a District Vigilance Monitoring Committee as per the Manual Scavenging Act, 2013 should be set up in Kohima.

Assuring to look into the requests of safai karamcharis for increase in their wages from Rs 6000 per month at present, he directed the authorities concerned to provide them leave benefit, safety equipment, housing and medical facilities, etc.

He said all the safai karamcharis should get health card under Pradhan Mantri Jan Arogya Yojana.