Hunger strike at Baghjan seeking compensation for the affected; withdrawal of EIA notification 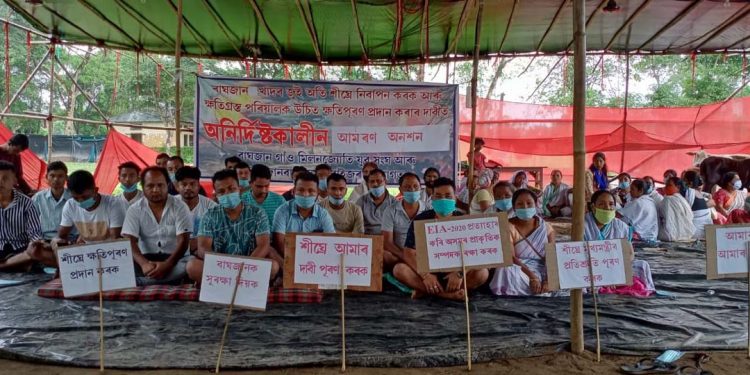 Baghjan Gaon Milanjyoti Yuva Sangha on Wednesday started indefinite hunger strike at Baghjan seeking compensation for those who have been affected by the fire at Oil India Ltd’s well.

Around 40 activists under the banner of Baghjan Gaon Milanjyoti Yuva Sangha started the indefinite hunger strike from 12 pm on Wednesday.

Satyajit Moran, president of Baghjan Gaon Milanjyoti Yuva Sangha said, “Tinsukia district administration has given us written assurance that within July 27, all compensation will be given to the families whose houses and property were damaged in Baghjan blowout.”

“Till date, the families whose houses were damaged have not received compensation. We demand that the compensation be provided by the Tinsukia district administration to the affected families,” Moran said.

Moran added, “We have demanded compensation for 597 families but till date the affected families have not received any compensation from the Tinsukia district administration.”

Two months have passed since the blowout in the Baghjan well of the Oil India Ltd (OIL) but still flames continue to erupt from the oil well.

OIL has failed to douse the flame ever after two months.

Moran said, “We demand withdrawal of EIA notification because it will have a disastrous effect on the environment.”

“The draft EIA 2020 provides for a post-facto environmental clearance for several large-scale projects, including industrial projects, which have the potential to cause severe damage to the environment,” he said.

The Union Ministry of Environment, Forest and Climate Change (MoEFCC) unveiled the draft to the public in March 2020 seeking to replace the 2006 version of the law.