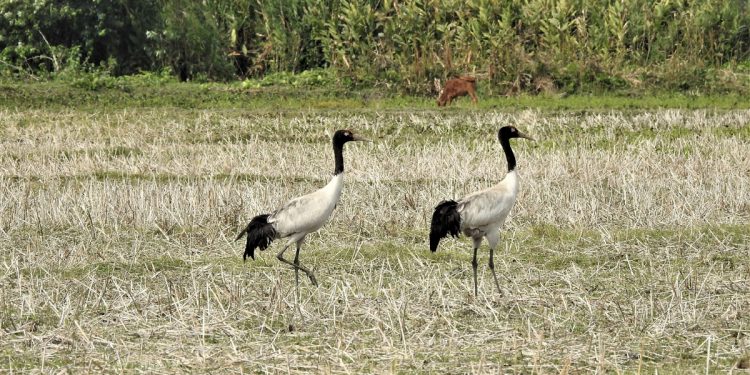 After Mandarin duck, Black-necked crane has been spotted in Assam which has been termed as the “new record”.

A pair of Black-necked crane was spotted in the southern boundary of the First Addition to the Manas National Park.

Confirming the news, Rathin Barman, the joint director of Wildlife Trust of India (WTI), on Friday tweeted: “After Mandarin duck now another surprise in #Assam. #blackneckedcrane in #greatermanas in Assam, India. New Record.”

WTI sources said the two individuals of Black-necked crane were sighted by Tiken Chandra Ray of No 1 Chaurang village under Panbari Range of Manas National Park.

“He found the birds seven days ago. Some villagers tried to kill the birds. However, some other villagers requested and appealed to them to do no harm or disturb the birds,” it said.

“They have been there for the last one week in the paddy field outside the southern boundary of the First Addition to Manas National Park,” it added.

Tiken Chandra Ray has been involved in various conservation programmes implemented by the IFAW-WTI in Greater Manas.

Ray is the president of the Rwikhati Eco Development Committee of No 1 Chaurang Village.

The committee was formed jointly by WTI with the forest department.

“Ray is looking after the hanging solar power fence installed by WTI and Chester Zoo jointly with the forest department to reduce the human-elephant conflict in the area for the last two years,” said WTI sources.

Black-necked crane is a visitor to Arunachal Pradesh and Bhutan and a high altitude bird.

Many areas people worship this bird.

Mandarin duck was spotted in Maguri Motapung Beel near Baghjan in Tinsukia district of Assam for first time after 118 years recently.