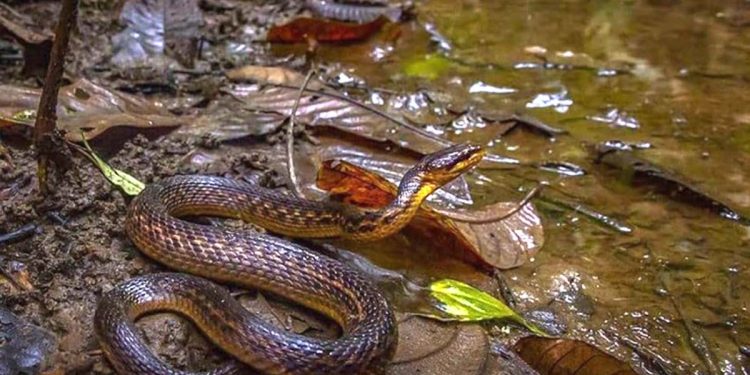 The Keelback snake species Herpetoreas pealii, also known as Assam Keelback, which was first seen in 1891, has been rediscovered in Assam-Arunachal Pradesh border after 129 years.

The species was rediscovered on the Assam-Arunachal Pradesh border in September 2018 when a team from Dehradun-based Wildlife Institute of India (WII) was retracing steps of the Abor Expedition, a military expedition by the British against Abors in 1911.

The details of the rediscovery of the snake species were published in Vertebrate Zoology, an international journal published from Germany.

“To commemorate the Abor Expedition, which besides being a military campaign had resulted in the collection of a large number of animals and plants, we revisited the area to find out the changes that had occurred in a century,” a report quoted Abhijit Das, a scientist at WII, as saying.

“Since the British started their expedition from Dibrugarh in Assam from a place near Poba reserve forest on the Assam-Arunachal Pradesh border, we also began there,” Das, who is an expert on snakes of Assam and Northeast India, added.

“It was in a marshy wetland inside the forest, where I encountered this snake endemic to Assam and not seen for the last 129 years. It was totally unexpected as people had thought it to be extinct,” he further said.

The species was an adult female and bi-coloured — dark brown above and pale mid-ventrally.

“To confirm the identity and evolutionary relationships of this rare finding, collaboration came from the Natural History Museum, London, where original the specimen was kept intact, unlike the one in the Zoological Survey of India, Kolkata,” said Das in an article.

“Subsequently, we identified this species as the Assam Keelback (Herpetoreas pealii), based on morphological and molecular comparisons,” he added.

The scientist claims that Assam Keelback is the real ‘Khilongia of Upper Assam region’ as this species is not found anywhere else in the world.

The discovery of the Assam Keelback from a slow-flowing stream inside a forest indicates the need to prioritize conservation of ‘special habitats’ to safeguard micro-habitat specialized species, the scientist further said.