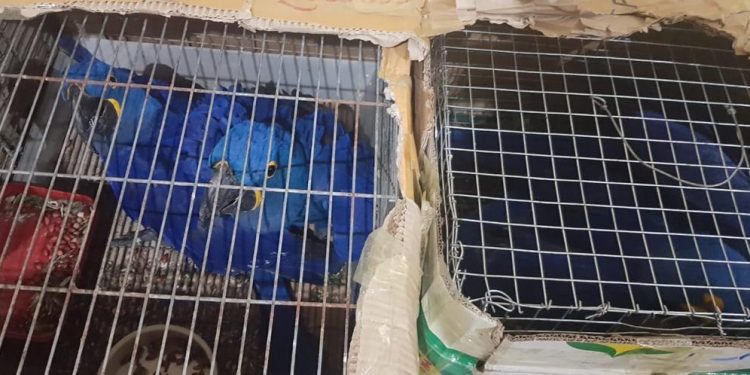 In yet another major success in rescue of wildlife, personnel of Assam’s Cachar Forest Division, Silchar intercepted a vehicle at Lailapur Forest Sub Beat carrying consignment of exotic wildlife.

The Forest authorities disclosed that a truck bearing registration No TS 08 UB 1622 coming from Mizoram side was intercepted by forest personnel at around 11:30 pm on late Tuesday night and help rescue a kangaroo, six macaw parrots, three tortoises and two monkeys.

In the course of interrogation, they revealed to the Forest personnel that the consignment was headed to Guwahati.

The Forest personnel were on a routine check of trucks passing through Lailapur to detect carrying of any illegal timber.

However, one of the Forest personnel detected obnoxious odours emanating from a truck.

On being questioned, the driver replied that it was nothing but foul smell from some rotten fruits.

Not convinced with the trucker’s reply, the Forest personnel searched the vehicle and found the exotic animals packed in plastic and carton boxes.

The DFO has directed the investigating forest official to ascertain the health of wildlife by local veterinary doctors.

“It is against the backdrop of the novel coronavirus COVID-19 pandemic and its connection to wet markets, it’s high time we put an end to such practices of keeping pet of these exotic species and refrain from illegal wildlife trade. Let them live in their natural habitat,” said Forest Range Officer, Deori, adding that identification of exact species is going on.

In its first global report on the illegal wildlife trade, released a week ago, the Financial Action Task Force (FATF) described wildlife trafficking as a “global threat”, which also has links with other organised crimes such as modern slavery, drug trafficking and arms trade.

The illegal trade is estimated to generate revenues of up to $23 billion a year.