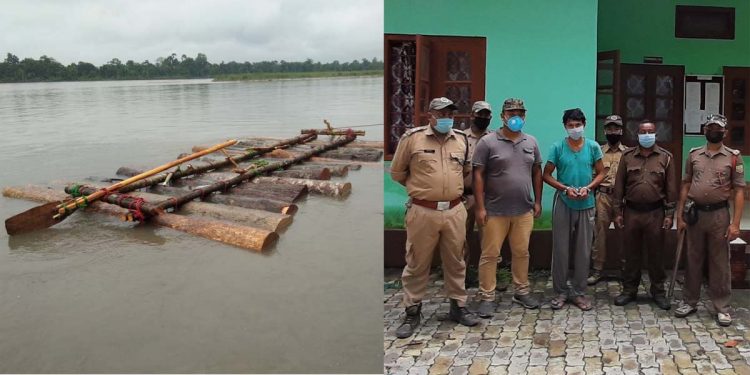 The forest staff of Nameri Tiger Reserve and National Park arrested a person for his involvement in illegal felling of tree inside the core area of the tiger reserve and national park.

Buragohain said, “A patrol team, led by forester-I Deep Kalita and Amrit Doley, was on regular night patrol along river Jia-Bhoroli inside the park.”

“At 13th Mile A.P. camp area, the team saw some miscreants felling trees illegally. While the patrol team was approaching towards the spot to nab the miscreants, some of them managed to flee by swimming in the river,” the forest officer said.

However, the patrol team managed to arrest one of the miscreants.

The arrested person, identified as Jatan Basumatary, is a resident of 2 No. Maidangshri in 12th Mile area, located in the vicinity of the park, Borgohain said.

The patrol team seized one wooden boat, many pieces of valuable logs, section saw, dao, rope and other incriminating items from the place of incident, he added.

Due to rising water level of river Jia-Bhoroli, which is flowing through the national park, the miscreants attempt to take the chance of felling trees and drifting the logs along the river by making timber rafts for selling in different areas of the district.

On July 25, 2020, the park authority arrested 2 accused, identified as Aroj Ali and Mannas Ali and investigation is going on.

The forest department has been able to unearth a big connection in both the cases.

Due to COVID19-induced lockdown, the forest and wildlife have become an easy money-making source for the miscreants.

The arrested person is from the encroached area of Balipara Reserved Forest, the forest officer revealed.

The encroachers have destroyed the reserve forest by illegal settlement and now they are allegedly becoming a threat to the flora and fauna of Nameri National Park.

But, despite various constraints and limited resources, the staff of Nameri Wildlife Range are constantly keeping strict vigil in the area to curb the illegal activities and foiling the attempts of miscreants.

A case has been registered against the arrested person under the Wildlife (Protection) Act, 1972 at Nameri Wildlife Range of Nameri Tiger Reserve and National Park.