Some of the artist in this year’s line-up included eminent classical guitarist and composer Matt Bacon from US, Thailand-based guitar maestro Padet Netpakdee 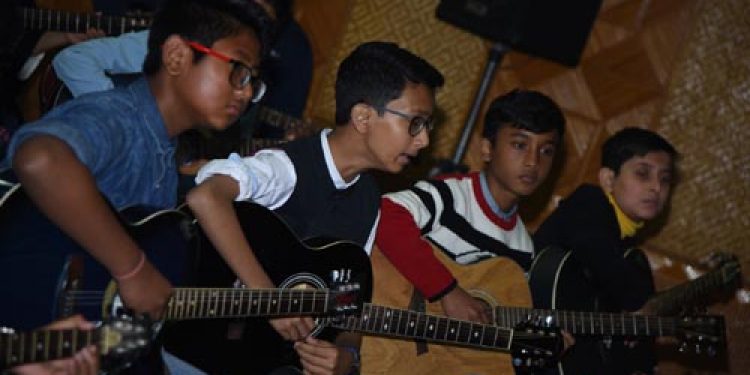 The third edition of the Guwahati International Music Festival, enthralled audiences in the city on Friday. Image credit: Life's Purple

The third edition of the Guwahati International Music Festival, enthralled audiences in Guwahati on Friday.

Organized by the Eastern Beats Music Society in collaboration with North Eastern Council, Government of India.

Assamese filmmaker Bidyut Kotoky’s award-winning film ‘Guns and Guitars’ was screened for the first time in the Northeast, during the festival.

From classical guitar workshops to lecture-cum-demonstrations on indigenous folk music, the day-long festival ended with mesmerizing performances of musical strains from the other side of the globe and soul-captivating jugalbandis of musical maestros.

More than 150 artists from four countries performed in the festival. A number of spectators from different parts of the globe had also come to watch the festival.

A brainchild of Northeast-based writer and cultural activist Aiyushman Dutta, the idea of Guwahati International Music Festival was mooted way back in 2010 in order to provide a platform wherein musical maestros from across the globe can share stage and collaborate with our indigenous music and cultural practitioners.

In the first two editions, the festival had helped create new vistas for cultural collaborations of our topmost northeastern folk exponents with the finest of musicians from Goa, Nepal, UK, USA, Germany, China, Bangladesh, and the like.

The festival also showcased a unique orchestra of 100 suitars led by Guru Hem Hazarika followed by the unveiling of his newly developed musical instrument – the Hem Veena.

Socially conscious rock bands like Cultivators, Doorbin, amongst others also performed at the event, which saw upcoming Assamese singer Tushar Bhuyan giving a musical tribute to Assamese youths Neelotpal and Abhijeet who lost their lives in a tragic case of mob lynching last year.

A singer-song writer and multi-instrumentalist, Matt Bacon is a masters-degree holder from San Francisco Conservatory of Music and has performed across the world.

Padet Netpakdee is a sought-after Asian guitarist who completed his Masters in Classical guitar at the Conservatorium Maastricht (Maastricht, the Netherlands). Born in Chiang Mai, a province in the northern part of Thailand that is rich in arts and cultures, Padet began exploring music through traditional and regional musical instruments.

The participation of these two renowned classical guitarists will undoubtedly amplify the horizons of western classical musicians, students and aficionados alike.

Talking about this year’s event, Eastern Beats Society founder, secretary and GIMF curator Aiyushman Dutta said, “After a hiatus of four odd years, it is truly an exuberant feeling to host Northeast India’s pioneering home-grown property. Although a number of music festivals are held nowadays across the region, GIMF holds a special position in our heart because it is the sole attempt at creating a global platform for musicians and music professionals in Assam. We are indebted to Ram Muivah, Secretary NEC, Moloy Bora, IAS officer and Razvee Hussain and Bhaskar Phukan of the Assam Tourism Department to help us host the event.”

At present, the Eastern Beats Music Society runs a school of music in the fringes of the city where music is taught free-of-cost to youngsters and adolescents, besides conducting free football coaching camps.