The team of adventure reality show MTV’s Roadies Extreme which was filming in Meghalaya last week is now in Kaziranga National Park in Assam.

Actor Neha Dhupia is back on the show as a gang leader with Nikhil Chinapa, Raaftar and Prince Narula.

Rapper Raftaar and the rest of the leaders – actors Neha Dhupia, Prince Narula and popular DJ/VJ Nikhil Chinapa and Rannvijay Singha were seen shooting in Kaziranga. 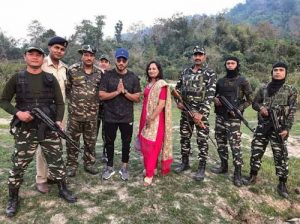 They started shooting for the picturesque locations and the extreme climatic conditions of Shillong. They are now shooting at Kaziranga and will shoot next in Bhalukpong, Itanagar and Ziro.

Rannvijay Singha who started his journey as a contestant in the show is now a ‘ring master’.

Actor Neha Dhupia says her love for adventure made her come back to Roadies even if it meant facing extreme situations.

Rannvijay says, this time they are shooting in the Northeast because it’s extreme.

“The temperature and living conditions are extreme… to make it ‘Extreme’ we had to select a place, where we could find ‘Extreme’ things naturally… some of the food here for the contestants is very ‘Extreme’ because it’s out of their comfort zone… plus, I love the northeast,” said Rannvijay, who won the first season of the show.

MTV Roadies is a youth-based popular reality television show on MTV India. The show first aired in 2003. In the show, a group of contestants travel to different destinations and participate in various tasks that seemingly challenge their physical and mental strength