The Union I&B ministry has sought an explanation from Amazon Prime Video, taking cognizance of complaints that Hindu gods and goddesses have been ridiculed in the web series ‘Tandav‘.

The Union information and broadcasting ministry (I&B) has summoned officials of the streaming platform Amazon Prime Video on the basis of a complaint received from BJP MP Manoj Kotak.

The political drama has been created, directed and produced by filmmaker Ali Abbas Zafar with Himanshu Kishan Mehra.

It is written by Gaurav Solanki, who is well known for Article 15. 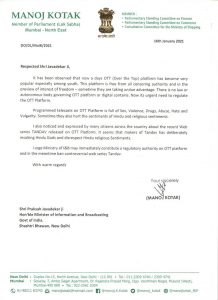 A media report quoted a source in the I&B ministry as saying: “The Ministry has taken cognizance of the matter (complaints) and asked Amazon Prime Video to explain.”

The Mumbai North-East MP in his letter to the Union IT minister said: “It has been observed that nowadays OTT (Over the Top) platform has become very popular especially among youth. This platform is free from all censoring authority and in the preview of interest of freedom — sometime they are taking undue advantage.”

Saying that there is “no law or autonomous body governing OTT platform or digital contains”, he said now there is “urgent need to regulate the OTT platform”.

He alleged: “Programmed telecasts on OTT Platform is full of sex, violence, drugs, abuse, hate and vulgarity. Sometime they also hurt the sentiments of Hindu and religious sentiments.”

“I also noticed and expressed by many citizens across the country about the recent Web series TANDAV released on OTT Platform. It seems that makers of Tandav has deliberately mocking Hindu Gods and disrespect Hindu religious Sentiments,” he stated.

The MP urged the IB ministry to immediately constitute a regulatory authority on OTT platform and in the meantime ban controversial web series Tandav.

Besides parliamentarian Kotak, BJP MLA Ram Kadam from Ghatkopar West constituency has asked the director of the political drama to remove the portion of the web series in which Lord Shiva is ridiculed.